BIG ON SMALL BUSINESS,
PASSIONATE ABOUT HELPING THEM GROW.

"It's very satisfying to provide a cost effective solution to customers, and then have them return to Toyota when more solutions are needed"

I'm born and bred in Melbourne, have worked as a forklift and order picker operator and have previously sold other supplies and services in the forklift industry.

When the opportunity presented to join Toyota Material Handling Australia I was keen to get onboard and have enjoyed contributing to businesses in my area across a wide range of industries, including Rapid Pak, BNA Model World, Polymer Processors and Viscon Construction..

A few of Ross' favourite things

I'm a passionate Richmond Tigers supporter and have been strongly involved in local junior footy, basketball and cricket.

A Melbourne market gardener recently became the lucky winner of Toyota Material Handling's promotion to win the purchase price of any new Toyota walkie stacker or electric pallet jack up to the value of $15,000, purchased between June and August 2019. 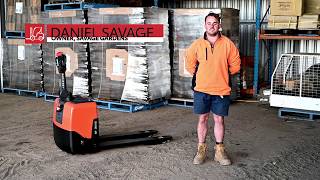 Daniel Savage of Savage Gardens said the fourth-generation family business was seeking a new electric pallet jack and evaluated several brands before arriving at a Toyota LWE130 model. "We needed a pallet jack for our truck and looked at some other brands, but they didn't have the turning circle we wanted," said Mr Savage. "Also, we have had many Toyota forklifts in our business over the years and found them to be extremely reliable. We thought about trying to save some money up-front by going to a different maker but in the end, we said, 'No, if the Toyota pallet jacks are like their forklifts, they'll pretty much last forever'. So, we rang-up Ross."

Ross Hourigan, Toyota Material Handling Australia (TMHA) area sales manager, Victoria, said Savage Gardens' decision to buy the Toyota LWE130 electric pallet jack was carefully considered. "They're a family business so they think hard about what they spend their money on," said Mr Hourigan. "We went through a process to help them select a unit that best fit their requirements for the tasks they were doing," said Mr Hourigan. "We put a demonstrator model on their site and showed them what the controls do and how to operate it safely, and then left it with them for a couple of days to practise its operation."

"Also, we have had many Toyota forklifts in our business over the years and found them to be extremely reliable."

The Toyota LWE130's narrow chassis is renowned for its excellent manoeuvrability in confined working areas and Savage Gardens' Daniel Savage said he found this feature particularly appealing. "The turning circle on the other brands we looked at was too wide. It was too limiting for us," Mr Savage said. "When Ross gave us the loaner we were impressed at its lock in tight spaces, it turned beautifully, and we also found the Click-to-Creep function to be really good.

TMHA's Ross Hourigan said it was Toyota's famed quality, durability and reliability that eventually won-out in the selection process. "We know that Savage Gardens also trialed a couple of other brands but in the end, they went with Toyota because they could trust the performance. Their Toyota forklifts have proven to be very reliable and durable in the past and they expect the same will be the case with the Toyota LWE130 electric pallet jack. Mr Savage said he was quite surprised to hear the news. "When Ross rang me and told me I'd been picked out as the prize-winner and would be getting the pallet jack for nothing, I was pretty chuffed. It was quite unreal."

Mr Savage said the business grows an assortment of vegetables, and that Toyota Material Handling has been part of its history for a long time. "We are fourth-generation vegetable farmers and over the last 20 years many Toyota forklifts have helped our business grow and deliver produce for large-scale retailers such as Woolworths and Melbourne Markets.

OUR REPS PROVIDE SOLUTIONS. THIS IS HOW

Here’s what to expect when working with your solution adviser:

On-boarding
LEARN MORE ABOUT HOW OUR REPS CAN HELP