Located in Cambridge Park, outside of Hobart, Juicy Isle is an Australian owned and run business producing a wide range of high-quality beverages, including juices made from Tasmanian organic fruit and also locally sourced still and sparkling mineral water products.

The business was founded in Tasmania nearly 50 years ago and employs between 80 and 100 people, seasonality-dependent.

Juicy Isle General Manager, Michael Goward, said in addition to its beverage production the business has a sales distribution network covering all of Tasmania and distributing beverages, snacks and confectionary for global FMCG brands. We service everything from the local corner store to national accounts," said Mr Goward.

The Toyota Reach forklifts are at the heart of the business' warehouse operations, helping it squeeze out material handling efficiencies. 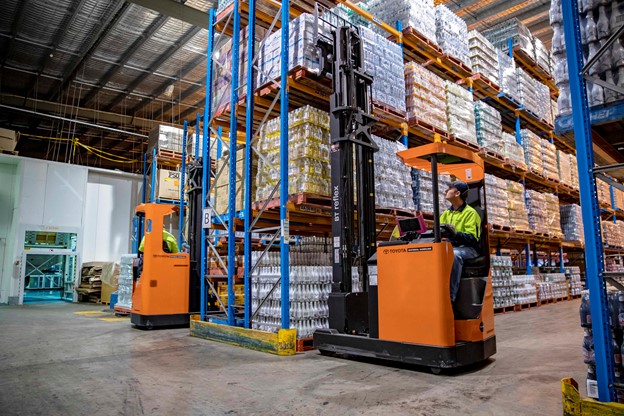 "Toyota's are first-and-foremost more reliable and also superior to operate in terms of the ergonomic controls, the comfort and visibility."

"We constructed our purpose-built facility 13 years ago and we had suppliers such as Dexion and TMHA involved in its design and layout, to help maximise area and the racking space," said Mr Mackenzie.

"Part of that was minimising the space between the racking so you can get more of it into the warehouse, making the most efficient use of our footprint.

"That process involved consultation with TMHA and their rep', Rodney Jones, who examined the technical data for the warehouse layout and matched it to machine performance.

"Rod advised the Toyota forklifts would be the most suitable because of their manoeuvrability and tight turning circle - it was mainly worked around the turning circle - and high-reaching capabilities, allowing them to go all the way up to our ceiling.

"That's how we managed to achieve maximum racking efficiency."

As TMHA Hobart/Southern Region area sales manager, Rodney Jones explained: "We always try to understand our customers' specific needs in as much detail as possible, to help them make the most informed and appropriate equipment selections," said Mr Jones.

"We refer to this as Tailored Business Solutions and it's a cornerstone of the Toyota Advantage."

Juicy Isle's Michael Goward said the relationship between Juicy Isle and Toyota Material Handling goes back 20 years. "Rod Jones delivered the very first Toyota reach truck in the state to assist our Hartz Mineral business and it's something of a book-end that he's just provided a new replacement for this unit before he retires," said Mr Goward.

TMHA's Rodney Jones said the service life of Juicy Isle's reach trucks points to another key part of the Toyota Advantage: "Some of their reach trucks are very old but still in service, which is remarkable because Juicy Isle is close to what we call a 'grocery-line' operation," said Mr Jones.

"They're pretty much working the forks at six- or seven-metre heights all day, so a lot is demanded from them.

"Juicy Isle has been very pleased with their reach forklifts because they've had such a good run out of them; they've been up-to-the-task with long service life.

"It's another example of our famed reputation for quality, durability and reliability."

"I come from a finance background and we historically had machines on an operating lease, but given the performance and longevity of the reach trucks I saw a strong value proposition in us purchasing them outright and extracting the longest service life from them as is practicably possible."

Along with Toyota petrol forklifts, the reach trucks comprise the bulk of Juicy Isle's material handling fleet and TMHA are its preferred supplier for all forklift equipment.

"Due to growth opportunities, we're in the process of building a new warehouse next to our existing one and will certainly once again be looking to TMHA to ensure our material handling equipment meets our expansion requirements as efficiently as possible."

Glen Mackenzie concurred: "Toyota is our preferred supplier for all forklift equipment. We have a couple of other brands in counter-balance and order-pickers, but we'll be looking to replace those with Toyotas as they wear out," said Mr Mackenzie.

"I've used other brands in this role and in previous roles at other companies and to me the Toyotas are first-and-foremost more reliable and also superior to operate in terms of the ergonomic controls, the comfort and visibility.

"Safety is another consideration for our reach trucks. When the BTs are at full extension - in our case 7.5 metres-high - their operations automatically slow down.

"Once the mast gets down to two metres, it resumes all its normal speeds and capacities again. It's an inbuilt feature and greatly contributes to the safety of our operators and their colleagues." "Juicy Isle has been very pleased with their reach forklifts"

"Toyota forklifts would be the most suitable because of their manoeuvrability"