An environmental entrepreneur operating some of Victoria's largest recycling businesses has unlocked the economic potential of Toyota Material Handling Australia's electric forklifts by charging them with solar electricity.

Operating from Dandenong South, Victoria, Smart Recycling and its associated businesses annually divert over 50,000 tonnes of waste from landfill and is one of the state's largest timber pallet recyclers.
The Smart Recycling site transforms 95 percent of received-waste into cost-effective, environmentally friendly products.

Smart Recycling managing director, Ward Petherbridge, said his business started transitioning from diesel-powered forklifts to a fleet of Toyota electric-engined equivalents after entering a business founded by his father, Geoff Petherbridge, who formerly operated a sand pit and solid waste tip on the present site.

"We've had a lot of different forklift brands over the years and, comparatively, the Toyotas are very-well built"

Ward Petherbridge sparked his passion for environmentalism whilst studying environmental science at University in the Netherlands and afterwards brought his learnings back to Australia.

"We had the permits to receive waste, so we came up with the idea of recycling," said Mr Petherbridge.

"Recycling was pretty advanced in Holland in the Nineties, but there wasn't much of it going on in Australia at that time.

"In 1995, I thought it would be a good starting point to separate green waste for composting and to make a blended top-soil. Then timber-mulching. We grew from there and then started making pallets. Now, recycled pallets represent about 80 percent of the turnover on the Smart Recycling site.

"We manufacture pallets from recycled timber and also repair damaged pallets. We provide a net carbon benefit of 14,500 tonnes from timber recycling, alone. That business employs about 40 staff and that's what all the Toyota forklifts on that site are for."

Presently, Smart Recycling has four Toyota 8FBN 2.5-tonne electric forklifts and is about to add another to its fleet.

The site's former business relied exclusively on diesel-powered forklifts but after installing a massive solar-system on the depot roof, Mr Petherbridge intended to harness its economic potential by switching to battery-powered Toyota forklifts.

"The impetus for getting Toyota electric forklifts was putting 100kW of solar on our roof, which provides a 'free' source of electricity for charging the forklift batteries," Mr Petherbridge said.

The heart of Smart Recycling's business is reducing energy consumption and waste via efficiency which, hand-in-hand, creates an economic benefit and competitive edge.

"It's the ethos of our business: our mantra is reduce, reuse, recycle, recover - and it also makes economic sense," said Mr Petherbridge.

"With our transition from diesel to electric Toyota forklifts we are saving a-good $100 per week, per machine on fuel. That really adds up as savings.

"The solar system is so efficient I have paid only a few hundred dollars for electricity over the last couple of years.

"The pay-back on the investment in the solar system is only about 3.5 years and we've had the electric Toyota forklifts for two years. So once it's paid off, operating our Toyota electric forklifts makes even more financial sense."

"I like to be environmentally responsible and I find it important to consider the longevity of the things we use because, collectively, it makes a huge difference," said Mr Owen.

"Ward is naturally passionate about reducing environmental impacts through recycling and embracing technologies to do so. He's a champion of waste-minimisation and he's a natural forward-thinker. As such, he chooses the eco-friendliest equipment possible.

"He only deals with equipment that has low-footprint credentials and closely examines the lifecycle of equipment. That ties back to the quality, reliability and durability of our machines, which is a cornerstone of the Toyota Advantage and the reputation we go by.

"Some forklifts are built with planned obsolescence, but we at Toyota Material Handling build our forklifts to last a very long time- so that in itself makes a significant accumulative difference over the lifecycle of the machine."

Mr Petherbridge concurred: "We've had a lot of different forklift brands over the years and, comparatively, the Toyotas are very-well built," said Mr Petherbridge. "In terms of quality, you generally get what you pay for. Some forklifts are a fraction of the cost but they don't have the same lifecycle. Toyota forklifts are resilient machines.

"We bought our first diesel Toyota forklifts for this business around 2004. They have about 15,000-plus hours on their engines and they're still going strong. We have two other depots that don't have solar production, so I have them operating there.

"The oldest electric Toyota forklift has only been in service for about two years and nothing has gone wrong with it.

"Another observation I have about longevity is not only about Toyota forklifts, it's about TMHA staff. I think I've only ever dealt with two different people such as Grant Owen in a couple of decades."

Mr Petherbridge's vision extends even beyond the service life of his Toyota electric forklifts.

"For us it's about the chain of responsibility and the circular economy. For products, it's very important in the design phase to plan what will be done with each major component at end-of-life. You need to ask: 'How is it recycled and what is it turned back into?'."

"In this case, you want to know almost all forklift can be recycled. We're interested in that because it's the business we're in, but also such considerations might become compulsory. E-waste is going to be banned from landfill so things such as mobile phones and TVs will need to be broken down and recycled. It may end up being the same case for forklifts. 'Luckily', Toyota forklifts are highly recyclable, being mostly steel. There's actually very little plastic in them, so a relatively minuscule amount of the machine is unrecyclable."

An example of such consideration is the recyclability of the batteries that power Smart Recycling's fleet of electric forklifts.

TMHA's Grant Owen said there was a conscious decision to go with lead-acid batteries because they are 100 percent recyclable: "The plastic, the acid, the lead - everything," said Mr Owen. "Also, scrap-metal yards love to recycle our forklift bodies because of the high grade of Toyota steel."

The conscious decision made by Smart Recycling to employ Toyota electric forklifts has a present and long-term benefit for its profits and also makes an exemplary contribution to the planet's wellbeing. Mr Petherbridge points to industrial solar as being key to such success. 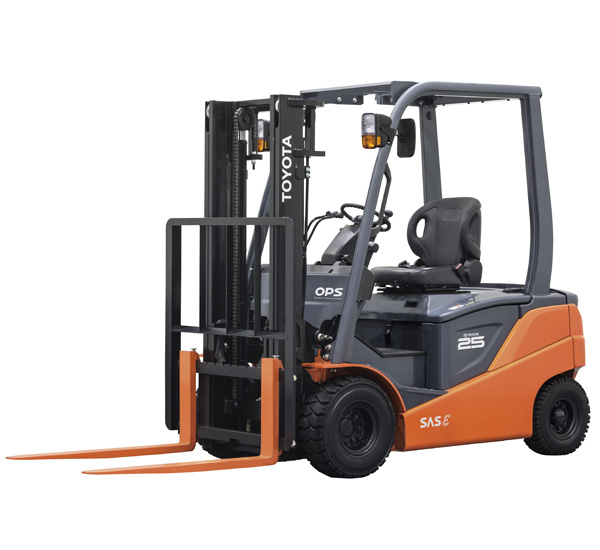 "The Toyota forklifts are very-well built"

"In terms of quality you generally get what you pay for. Toyota forklifts are resilient machines.”