WILD RYE'S BAKING CO ON THE RISE WITH HELP FROM TMHA

A NSW South Coast bakery has sought out the excellent reliability, ease of use and nimble manoeuvrability of Toyota Material Handling Australia (TMHA) products, as it goes from strength to strength not only as a bread wholesaler, but also a coffee roaster.

Located in the coastal town of Pambula, Wild Rye's Baking Co has expanded its business since establishing itself in 2006, and required a new piece of equipment capable of traversing tight spaces in the company's busy warehouse.

Inheriting a forklift upon taking over the business, Wild Rye's co-owner Todd Wiebe said the company eventually needed something nimbler for the warehouse, and began to reach out to potential suppliers.

However, after seeking advice from friends, it became clear that TMHA was the obvious choice for Wild Rye's.

"We inherited a forklift which served us well, but we needed something that would be able to manoeuvre around tight spaces - we're quite restrained for space down there. We needed to be able to stack high but not have so much of a turning circle," Mr Wiebe said.

"We turned to the stacker style of forklift, and we reached out to a few companies, but we had a couple of friends who used a lot of Toyota stuff and said they're the way to go, and the reputation speaks for itself, so we ended up going with them."

The purchase of the Toyota Staxio SWE120S walkie stacker joined Wild Rye's existing line-up of TMHA pallet jacks, which have served the company with distinction.

One of the most important facets of the Toyota Advantage is the fantastic reliability of TMHA equipment, which is of huge importance to any business.

Mr Wiebe said that the reliability of his new SWE120S has been faultless since taking delivery of the walkie stacker, helping the company through the Christmas period - typically its busiest of the year.

"We love it, we've had no dramas with it which is the biggest pleasure. It does everything we need it to do, we can't fault it," he said.

"We just wish we'd bought it 10 years ago."
The SWE120S walkie stacker is compact and easy-to-use and powered by a low-maintenance and efficient AC drive motor. It features support arms that straddle loads, making it possible to handle closed pallets.

In order to maximise the space of its warehouse, Wild Rye's needed to also invest in extra pallet racking to complement its new stacker forklift.

TMHA Queanbeyan's branch manager Allan McCracken was able to easily provide the ideal solution for Wild Rye's, helping to facilitate not only the forklift but pallet racking for the warehouse.

"Allan came down and looked at the site, and I mentioned to him that I'm looking at getting pallet racking, and he mentioned they can actually help with that," Mr Wiebe said. "I was just going to buy it online and assemble it myself, but after talking with him and working out the legalities, it was just so easy to get them to do it.

"He sent down a technician who put it all together and supplied it, it was no issue for us, it was great."
Mr McCracken said the opportunity to bundle the forklift and racking into a single package came after conducting a site visit.

"We conducted a site review and at that time he was interested in the product, he was also considering purchasing racking to fit out his warehouse," Mr McCracken said.

"We took the opportunity to ask the question whether we could quote him, also as he was going to another supplier, and from there he accepted both of our proposals for both the stacker and the racking."

Along with the exceptional safety, reliability and sustainability of the new equipment - all key factors of the Toyota Advantage - Mr Wiebe said the ease of purchase was one of the most pleasing parts of the process.
"Allan has been fantastic. He does what he says he's going to do - he doesn't leave you hanging on. And his service is second-to-none, I always get him on the phone and can't fault him."

Mr Wiebe added that he has already begun recommending TMHA products to others, with the dedicated service of the TMHA team and superb reliability of the products winning him over.

"The reliability, and service for us is the biggest thing," he said. "To have a relationship with a rep that's proactive and you can talk to and get on the phone rather than going through switchboards... we're just too busy."
Wild Rye's Baking Co established in 2006 by taking over the existing bakery on Pambula's main street, which was in dire need of a refresh.

Since then, the team of four has grown to 54 employees, wholesaling not only bread but also coffee, with three separate facilities catering to the needs of customers. 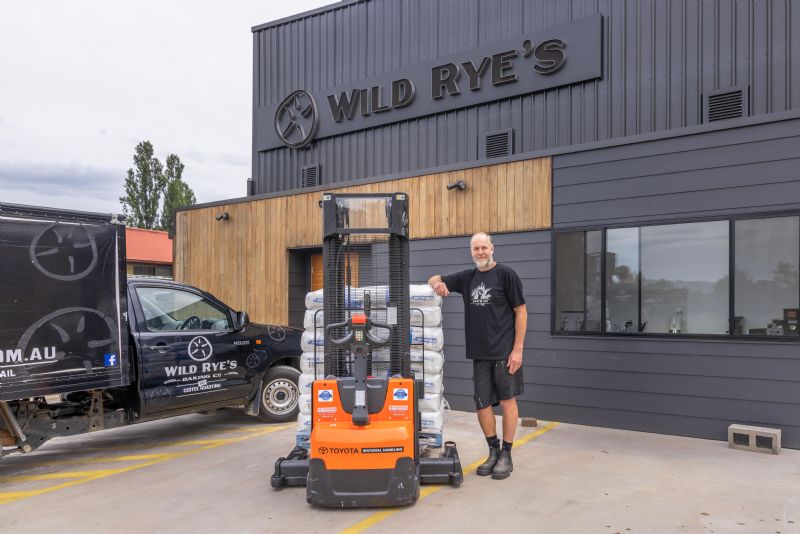 Wild Rye's Baking Co co-owner Todd Wiebe has been impressed with the performance of his new SWE120S walkie stacker.