Previously, TMHA's dedicated battery-electric models covered one to five tonne capacities. The new additions to the range open vast opportunities for businesses seeking to reduce their emissions and also seek reductions in noise, harshness and vibrations (NHV) for their fleet and operators.

Customers with large-scale solar photovoltaic systems particularly would benefit from such models, given that, previously, such high-capacity forklifts were solely reliant on internal combustion engines.

TMHA Counterbalance Product Manager, Glen Ryan said the new range of high-tonnage dedicated electric forklifts are designed and manufactured in Europe to Toyota's exacting standards. "The range has been available in Europe for some time now and we're really excited to now have it here in Australia," Mr Ryan said. "We have recently added a 9FBM70T to our demonstration fleet so we can showcase this range to customers."

Mr Ryan said there are several advantages of the latest range of dedicated electric forklifts, from emissions and cost of ownership point-of-view and also in terms of reducing noise and vibration for the operator. "The range is essentially designed and built as a true alternative to an engine-powered forklift dual-fuel models," he said.

"Traditionally our core counterbalanced range is internal combustion engine-powered, however there is certainly a shift towards battery electric.

Manufactured by Toyota Material Handling Manufacturing Italy (TMHMI), the four forklifts benefit from being built to the same high standards of the Toyota Production system, as employed globally.

A thoughtful feature of the new models is their easy battery extraction. "It's a unique feature compared with smaller-capacity Toyota dedicated electric battery forklifts," said Mr Ryan. "The bottom of the forklift's chassis is cut-out in a U-shape so if you have to change batteries over the course of multiple shifts, all you have to do is drive underneath it with a capable forklift or specialised pallet mover, raise the battery and drive out."

Mr Ryan said a notable advantage of the machines is their ride quality. "They have a full floating cabin, so the cabin sits on four suspension dampers which reduces vibration transmission to the operator, making for a very comfortable ride," he said.

All models also feature electronic power steering (EPS) which for a high-capacity forklift make it feel nimble. "For such a large-tonnage forklift it has a minimal turning circle and is effortless to manoeuvre, giving you the feeling that you're driving a much smaller machine." he said.

"They also have shock-less landing, so when you're lowering the mast down to the ground there's a nice, soft, cushioning effect. There's no jolting and the load is protected."

Another new feature is an automatic park-brake as standard. "Normally, a forklift has a car-style hand brake lever or foot-activated parking brake, but with these new machines they automatically apply the parking brake when standing still, when the operator leaves the seat or can be manually engaged by the operator pressing a push button.

"Also, another benefit of the automatic park brake is when you come to a stop on an incline, the forklift won't roll back. And when you apply the accelerator to take-off again, there's no lashing or jolting motion."

SAS is a cornerstone of the Toyota Advantage, as Mr Ryan explained. "SAS is the first system in the world to monitor and control their forklifts through a combination of advanced sensors linked to an on-board controller, enabling assured load-handling performance and, therefore, safety.

Another aspect of the models' design is a futuristic appearance. "They have really appealing looks with dynamic lines and European style," said Mr Ryan. "I think all our forklifts look good but these models are particularly impressive."

The operator interface is similarly futuristic, with a well laid-out dashboard, which has been designed around the operator, including mini-lever controls and armrest, plenty of storage and a multifunction display screen with features including a wheel direction indicator, speed indicator, load indicator, battery discharge meter, as well as in-built pre-operational check list questions (if Telematics is included as an additional option) to name a few.

Ergonomics and visibility are stand-out features of the range, said Mr Ryan. "Operator comfort and the all-round visibility is excellent, which can assist to reduce fatigue and increase productivity and safety gains."

"Another advantage is the driving behaviour software. This detects how the machine is being used, which in turn provides predictable and intuitive forklift control with wide fine-tuning possibilities. The 9FBMT also has a remaining operating time (battery power) indicator, three different power-select modes, programmable speed setting and an auto-off function (if the forklift is left idle for a pre-determined amount of time)," explained Mr Ryan.

Another bonus for customers is an extended servicing interval of 1000 hours or 12 months (whichever comes first). Also, from a servicing point-of-view, the machine is very accessible for technicians. "The response from our technicians has been extremely positive regarding access and component locations, particularly how this can assist with faster turnaround times on preventative maintenance," Mr Ryan said.

Mr Ryan said that although a battery-electric forklift has a higher initial purchase price than an internal combustion engine-equivalent, it can yield a better return-on-investment and lower total cost-of-ownership. "Charging a battery of course costs money, but it's not as much as traditional fuel costs," he said. "The new models have been designed to replace IC equivalents. There will still be some scenarios where an IC- powered counterbalance forklift would be a more suitable fit, but all in all, battery-electric is the way of the future." 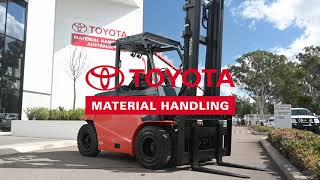