Modern Motor Trimmers owner, Garry Spouge, is a West Coast Eagles fanatic and so when it came time for him to take delivery of his latest forklift, a Toyota 32-8FG30 3-tonne compact, we at Toyota Material Handling Australia (TMHA) delivered it to him in the blue and yellow colours of his beloved AFL  team, as custom livery is available as an optional extra by special request.

As an AFL fan and die-hard Essendon Bombers supporter, myself, I appreciate how exciting it must have been for Garry to have his forklift themed.

It purchased its first Toyota forklift, a 1.8 tonne gas-powered 32-8FG18, a decade ago, after identifying a need for specialised seating and refurbishment in the mining and construction sectors. 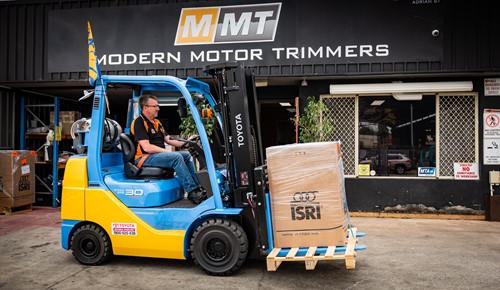 Seating sales comprise around half of Garry’s business, with the other half specialising in trimming the cabins from large machinery such as from the mining sector. Such vehicles get a very hard life and routinely need refurbishment. Modern Motor Trimmers takes underground and above-ground mining cabins and applies sound-deadening material such as foam and panels. The cabins are then upholstered by the cutting of perforated material which is folded and glued into place.

Such specialised work required the addition of several new Toyota machines, the most recent being the 32-8FG30 3-tonne compact forklift, which was chosen for its increased capacity compared with the business' ageing 1.8-tonne Toyota forklift.

As Garry's business has grown, he has incrementally added more Toyota equipment to his fleet. When he branched into overhauling cab bodies from dump trucks, he needed a forklift with more capacity. We took a look at what he was doing and recommended a forklift, so he now has the compact 3.0-tonne 32-8FGK30 dual fuel gas/petrol with a side-shifting fork positioner and a deluxe multi-function display with weight gauge.

This is in addition to his battery-powered 8FBRE16S Toyota reach truck and TMHA Sprint picker platform.

Garry said TMHA was on hand when he needed to up-spec his fleet. When his business diversified into heavy machinery cab-lining, he needed different and higher-capacity machines that could reach the cabins and work comfortably and safely at height.

Local TMHA rep Tony McGuire went out to Garry’s site and had a good look at he was operating before making suggestions to improve output based on main duties. For example, the new forklift has shorter tynes and an attachment that assists moving different sized and shaped objects around. They also have a load weight indicator which determines the weight of the load on the tynes against the forklift load plate.

Modern Motor Trimmers relationship with TMHA goes back 20 years when they helped us with foam sound deadening treatments for Huski skid steer loaders and they still supply clear side-linings for our Toyota forklifts so it’s nice to have a rounded relationship whereby we are suppliers to each other.

Garry’s experience with Toyota passenger vehicles also helped make the step over to Toyota Material Handling equipment an easy one, having owned many Toyota vehicles over the years including LandCruisers and HiLuxes which have proven to be reliable and last the distance.

Toyota’s well-known reputation for safety, reliability and longevity played heavily into Garry’s choice of handling equipment and he plans on sticking with us in the future.

Such plans include adding two new TMHA lift platforms and some sweepers to his fleet when Garry soon moves to a new specialised factory.

Wishing Gary and his beloved West Coast Eagles the best of luck this year.