If you visit virtually any of Australia’s Fresh Fruit and Vegetable Markets you’ll see that there is one colour in particular that is extremely popular - Orange. Apart from the many varieties of fresh fruit and vegetables that share this vibrant colour, it is also the colour of arguable the most widely used forklifts at the Markets – Toyota.

Toyota Material Handling Australia has long been a trusted forklift supplier to Australia’s fresh fruit and vegetable wholesaling community, who rely on Toyota's legendary reliability and world-leading safety to keep their business moving. It’s a reciprocal relationship of trust that is long-standing and one which is sincerely valued by Toyota.

It’s fantastic now to see that relationship further extended via a fleet of Toyota forklifts at the heart of a thriving waste-recycling centre at Sydney Markets Flemington, New South Wales, which started its Green Point waste-recycling facility in 2005 and has since built-up its waste-management capacity and, commensurately, its Toyota forklift fleet.

Sydney Markets veteran of twenty-two years and Green Point Facility Environment Manager, Con Kapellos, said that since the recycling centre's inception, a dramatic reduction in landfill waste has been achieved, with Green Point now up to about 70 percent recycling at the moment which they continually strive to improve.

Con also advises that Green Point is very proactive with managing their waste streams. For example, they process polystyrene boxes on-site and sell them into Korea as solid bulk material which they make interior building products out of, such as cupboards and architraves, etc.

Furthermore, it’s great to see also that Sydney Markets Stakeholders and Green Point donates approximately 1500 tonnes of fruit and vegetables to Foodbank, every year. Sourced form market’s tenants food waste, it is examined to see if it is clean and fit for human consumption. This is a fantastic initiative to help the needy which is a win-win situation for all. Some of the organic waste goes freely to farmers for stock-feed, with the balance of the organic waste is sent to Earthpower, which is an anaerobic digestion facility located at Rosehill, who convert green waste to energy and a fertiliser product.

Green Point has long been an advocate of Toyota forklifts, since the time they borrowed their first one back in 2005, thanks in part to Toyota unwavering commitment to forklift safety with Toyota’s exclusive System Of Active Stability (SAS) system, an important product feature to the Green Point team and a major reason that they continue to use our forklifts.

SAS is stability control systems in that it significantly contributes to accident-prevention by detecting motion during operation. The SAS computer constantly analyses the potential for a tip-over. If the SAS detects tip-over potential, it sends a signal to the Active Control Rear Stabiliser, which then minimises tip-over potential. It’s an important feature helping to keep forklift operators safe. Please visit our website for more information on SAS https://www.toyotamaterialhandling.com.au/safety/

Sydney Markets veteran of 22 years and Green Point facility environment manager, Con Kapellos, said his fleet of Toyota forklifts have helped the waste-recycling centre save over 6000 tonnes of organic waste going into landfill, netting the business a $35 million saving since it's 2005 inception. 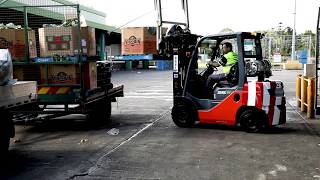