We at Toyota Material Handling Australia are always pleased to be supporting family businesses and the story behind East Coast Beverages is a great one.

Based in Kulnura on New South Wales' Central Coast, East Coast Beverages is a grower, manufacturer and purveyor of fruit, freshly made premium fruit juices and natural spring water. The third-generation family run fruit-juice business has had Toyota forklifts at its core since its inception 55 years ago.

One of the last family owned juice enterprises and employing more than 25 local staff and a large host of family members, East Coast Beverages bought its first Toyota forklift at the business' foundation.

East Coast Beverages Sydney Markets manager, Sam Lentini, says that family has been at the heart of the business' success and continues to be so, today. So too has been its clever production systems, central to which is a fleet of 15 Toyota forklifts.

Sam explained that his family name originates from the Italian island of Sicily, where Lentini is a citrus-growing region that goes back centuries, which is why after emigrating to Australia his grandfather, Salvatore, bought fertile land blessed with natural spring drinking water in Kulnura and planted his first orchards in 1965.

After the orchards yielded fruit, Salvatore picked and packed it to sell at Sydney Markets. His three sons joined the business and purchased another property close-by, to plant more citrus.

They were selling their citrus at stands at Haymarket and the Sydney Markets at Homebush, and also supplying juice factories around Sydney. But once the government allowed the importation of concentrated fruit juice, there was nowhere for the family to sell their fruit, so they decided to start squeezing their own.

As the business has grown, they have increased their Toyota forklift fleet size. They started off with just the one, and now have 15 in total – a mixture of gas, diesel and electric. And they use Toyotas exclusively.

Amazingly, they still have their first Toyota diesel forklift at their farm shed. It was one of the original batch, and was working in the main business until this year when they purchased a replacement for it – a new Toyota 8FBE18 electric three-wheeler that is a lot easier to use in the cool rooms because they have a better turning circle.

Sam says "the old fork is still going after 19 years, which is quite remarkable and shows how durable Toyotas are. We've sure gotten our value out of it."

We at Toyota have a highly refined production control system that stops production immediately when a problem occurs, thus preventing defects and producing high-quality machines.

Quality, durability and reliability (QDR) is a cornerstone of the Toyota Advantage and examples such as East Coast Beverages’ original forklift still operating after such a long working life are testament to it.

Another facet of the Toyota Advantage is Tailored Business Solutions. Reflecting this, East Coast Beverages modified some of its forklifts to suit refrigerated environments by putting lower frames on them, so they don't hit the cool-room roofs. They also customised the paint job on the latest three-wheeler in the company's blue colours.

Sam says East Coast Beverages' forklifts get a pretty hard life, with the new ones getting worked up to 19 hours a day. This points even further to the remarkable longevity of the business' fleet.

Sam says the Toyota forklifts' durability has been proven through their long experience in business. “It's a key reason we keep buying them. They're reliable.” Sam also says Toyotas are a favoured forklift at the market, in general.

Another key feature of the Toyota Advantage is our exclusive System of Active Stability (SAS). SAS is the first system in the world to monitor and control forklifts through a combination of advanced sensors linked to an on-board controller, enabling assured load-handling performance and, therefore, safety.

Sam says the SAS system is another reason East Coast Beverages' forklift fleet is exclusively Toyota. "For safety they're really good. You have to be so careful and Toyota forklifts have the safety features, like stability control, that we want for our employees, and for our family." 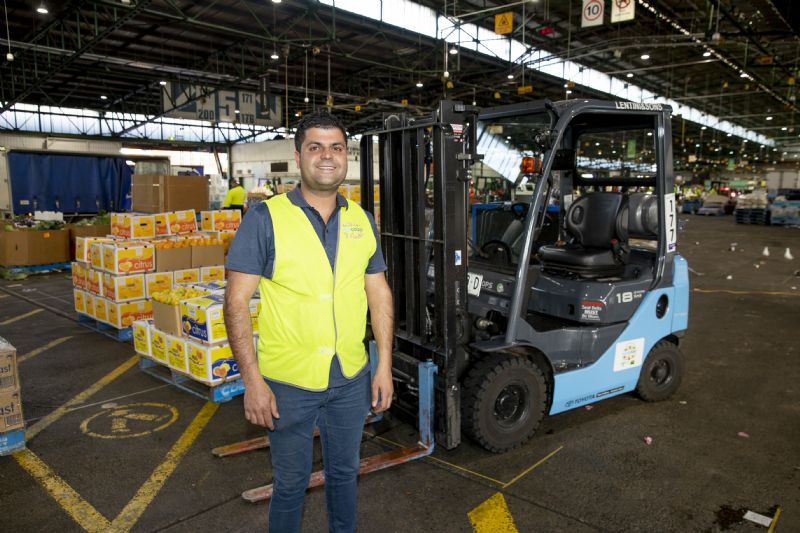