When you think of forklifts, you commonly expect drivers to be big, burly men, often squeezed into a tight forklift cabin.

However, as with most things in life, perceived stereotypes can be far from reality.

I’d like to take this opportunity to highlight a case in point and feature a situation where Toyota Material Handling Australia (TMHA) has assisted in creating a uniquely modified Toyota 8-Series 1.8 tonne payload forklift for one of our customers, Glen Dimplex Australia. The highly customised forklift has allowed a Dimplex employee to carry out a greatly increased range of duties at the business' warehouse in Dry Creek, north of Adelaide.

Glen Dimplex factory hand, Shaun O'Bryan, who has dwarfism, started as a labourer with Dimplex and over the many years of his employment acquired new skills and responsibilities on the job, most recently culminating in a desire to get his forklift licence.

Shaun had previously been using an electric walk-behind or 'push-along' forklift with operation controls designed to usually be at waist height. Because the controls were at head height for Shaun, there were safety concerns around his operation of the machine. Safety is a cornerstone of TMHA’s Toyota Advantage and we work constantly to reduce workplace accidents by ensuring our forklifts have requisite features and configurations for operator well-being.

Glen Dimplex engaged an occupational therapist through disability employment service provider, Barkuma, and after an environment assessment authorisation was made under the Federal Government's JobAccess program to modify a forklift for Shaun’s safe operation.

In an example of how TMHA can tailor business solutions to the specific needs of our customers – the Toyota Advantage once again in action – South Australia area sales manager, Paul Warburton, consulted with Glen Dimplex and recommended a forklift model most suitable for heavy modification.

TMHA’s Paul Warburton also engaged the assistance of longstanding key partner, Dometic, for some design and engineering elements of the 8-Series forklift customisation.

Dometic typically modifies forklifts to increase cabin height but in this case looked to drastically reduce it – handling heavy components such as the platform in its metal fabrication shop. Dometic started by getting the correct seat index point – the point of one’s hips when sitting in the seat – for Shaun, according to the proportion of his legs and arms to his torso.

Generously, Dometic donated all its time and production to the project.

TMHA’s pre-delivery team arranged for some other special modifications such as moving the handbrake out of the footwell to the main console, which was performed at Toyota's factory in Japan. Other changes were performed locally by bringing Shaun to TMHA Adelaide’s branch in Gepps Cross where measurements were taken for the fit-out.

A series of mock-ups were then made for floor height, handles, steps and pedals.

Modifications included raising the 8-Series' floor and pedals by 15 centimetres, moving handles down and adding extra handles to assist entry and exit, and the addition of mini-levers.

Shaun then test-drove the forklift several times over a nine-month period before the configuration was finalised.

A clever part of the modifications is that they are easily reversable and transferable. When it's due to be traded or upgraded, everything can be un-bolted to return the forklift to standard, preserving its value. And if it's replaced with another 8-Series, 90 percent of the modifications can simply bolt straight onto the new machine.

Previously, Shaun would daily ask a storeman to move large crates of parts for him because they were too heavy for the push-along forklift. Now, with his new customised 8-Series, he does it himself at will.

He can now perform all duties, including dispatch. This has provided not only autonomy for him but also efficiency for the company – something TMHA prides itself on helping businesses achieve by providing tailored services to suit specific needs.

We at TMHA have been extremely pleased to assist with a bespoke solution for Shaun and achieve a triumphant outcome from a less-than-ideal situation. And Shaun agrees, saying: “Toyota did such a fantastic job with the modifications. It feels exactly like it was built for me.

“Now, I don't have to ask anyone for help with moving things around or getting things down. It's made me completely independent in my job and I'm so appreciative about that. It's a real ripper." 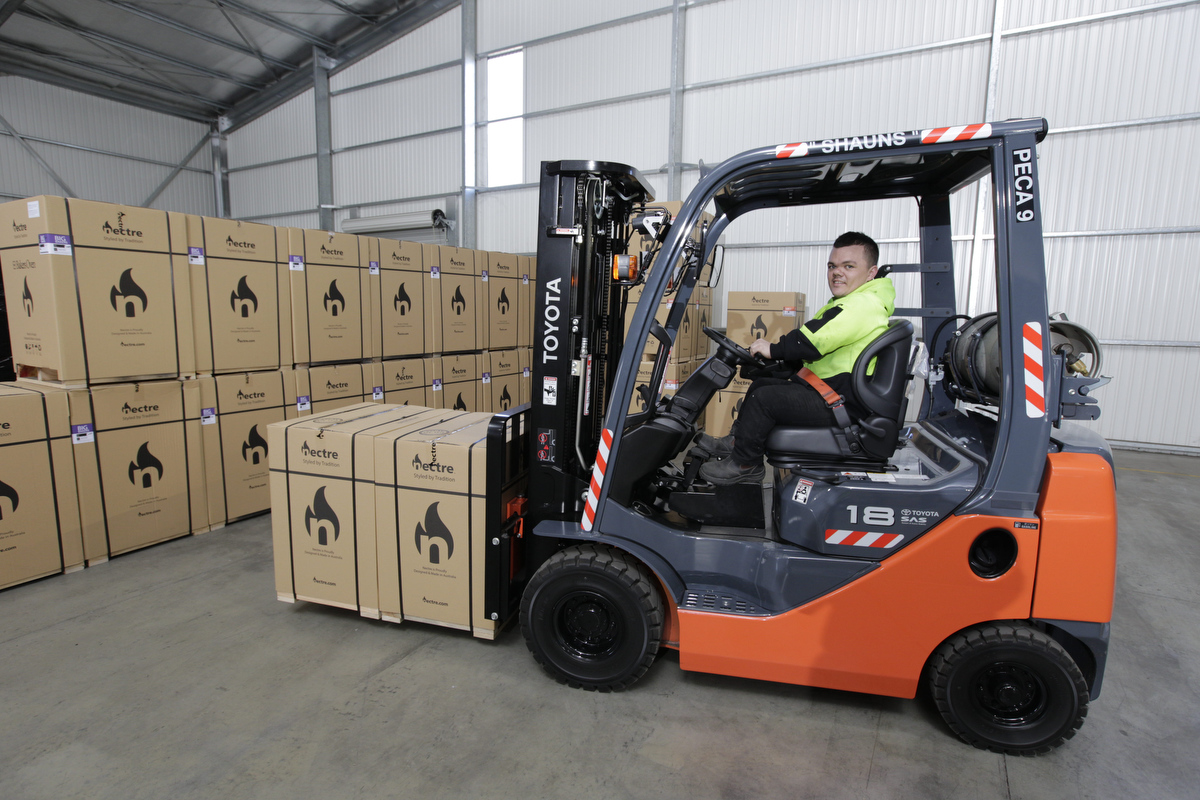