A family run fresh fruit and vegetable wholesaler has been using Toyota forklifts across three generations, having most-recently added four new 8FGs to its fleet.

Grech & Borg, which has been operating out of Sydney Markets, Flemington, for 60 years was founded by Joseph Grech and Victor Borg in 1967. Daughter of Mr Grech and Managing Director, Joanne Stone, said the men started out in Haymarket, New South Wales. "My Dad came over to Australia with his Victor Borg when they were only 16 and they worked for a fellow who eventually passed on the business to them," said Ms Stone.

"Back then, trading within The Hay Markets of Sydney's inner city, was very different. Merchants would spruik their produce to get buyers' attention. Everything was loaded by hand."

How 16-year-old Joseph and Victor would have marvelled at an 8 Series Toyota forklift in action.

"The balance between supply and cost influences our stock, but if a customer wants something and our growers don't have it, we can source it from within the markets," Mr Stone said.

The business started using Toyota forklifts as soon as they were available. "Basically, we have always had Toyotas," said Ms Stone. "Dad always had them and when I moved into the business, we had them exclusively, all except for one cycle where we tried another brand.

"About 10 years ago we tried another brand and had a batch of their forklifts, but we were spending a lot of money on fixing them. It was a common occurrence to have to take them to the mechanics and hire a rental forklift replacement for the day, which was quite painful.

"They just didn't handle the workload, so we don't have them any anymore. It was a one-off trial and we returned to Toyota straight afterwards and have had only Toyota forklifts in our fleet ever-since."

"In terms of duties they have a pretty hard-working life. The Sydney Markets are kind-of-like a mini suburb. Where we are based is about a six- or seven-minute drive on the forklift to the dispatch area where we collect or deliver at the loading dock. Our forklifts operate as such for eight hours a day. So, they get worked pretty hard. Also, being an outdoor area, the market has an impact on the forklifts in terms of the weather and road conditions."

As the business has grown, Grech & Borg have continually added more Toyota forklifts to its fleet. "We started out with two forklifts and over a 12-year period we have increased our fleet to five. Some of our Toyota forklifts have built-in scales and they have front-and-rear glass screens to provide more protection for our operators from the weather, but other than that they're all the same and standard."

Ms Stone said a key reason the business continues to buy Toyota forklifts is their exceptional reliability. "We actually haven't had a situation where we've had a Toyota forklift off-the-road with a problem," she said. "Their reliability is excellent.

"We have haven't had to spend any money fixing them, just the Toyota servicing, which obviously keeps them in good condition. We also turn them over every five years or so, which seems to be a good interval for ensuring our forklifts are doing what we need them to; namely working."

Toyota Material Handling Australia (TMHA) area sales manager, Michael Tsougranis, said Toyota's reputation for reliability is a big reason Grech & Borg sticks with Toyota forklifts. "They absolutely love their Toyotas and a huge part of that is that our forklifts don't let them down," said Mr Tsougranis. "They love that they just keep going and going, even though they have a pretty hard-working life there at Sydney Markets. That is a key part of our Toyota Advantage: Legendary Reliability.

"Toyota's reputation for reliability is well-known at the Markets, where I estimate we have about 85 percent market share. You'll see the prevalence of Toyota forklifts at Sydney Markets on any given day.

"Another thing they like is us having our service technicians on site at the markets at all times. No other forklift suppliers have an onsite presence at Sydney Markets so that's a big advantage because if something goes wrong for a customer we are already there on site, immediately available to fix it. That's another big Toyota Advantage: More Uptime."

Ms Stone agreed: "We have definitely found that out our Toyota forklifts have more up-time than the other brand that we tried. When it comes time for servicing, they arrive at our warehouse when our operators are finished and always do the service on the same day."

An extremely important part of the Toyota Advantage is World Leading Safety, and this particularly resonates with Mr Stone. "I'm the occupational health and safety guy so if I had to pick a single thing that I liked most about Toyota forklifts is their safety features because we really need to look after our staff and our business' liability.

"I like that they have a speed limiter and won't start without the seatbelt being on.

"I don't know too much about the technicalities of the stability system, but I always jump on the new one to put it through its paces and I am always impressed by how stable they feel. It's a very assured driving experience."

"It's the first system in the world to monitor and control forklifts through a combination of advanced sensors linked to an on-board controller, enabling assured load-handling performance and, therefore, safety," he said.

Finally, another Toyota Advantage is apt for Grech & Borg, as Mr Tsougranis explained. "At Toyota, one of our Advantages is Delivering More Than Just Forklifts and, in this case, we made some special modifications for Joanne in the form of a custom colour she wanted. We've had an in-house paint shop at our Moorebank headquarters for a few years now, and once she learned about that she was keen to paint them in hot pink."

"That's one of my favourite things about our Toyota forklifts," said Ms Stone. "Since the early days, the markets have predominantly been a 'macho-man's' environment. For years, I wanted to complete the new company branding by making our forklifts pink, but I always had pushback from staff. They used to get a bit of stirring when they were first driving around in them. However, with our most-recent fleet purchase with TMHA, I floated the idea with Michael from Toyota, and he was more than happy to make my branding dreams come true. 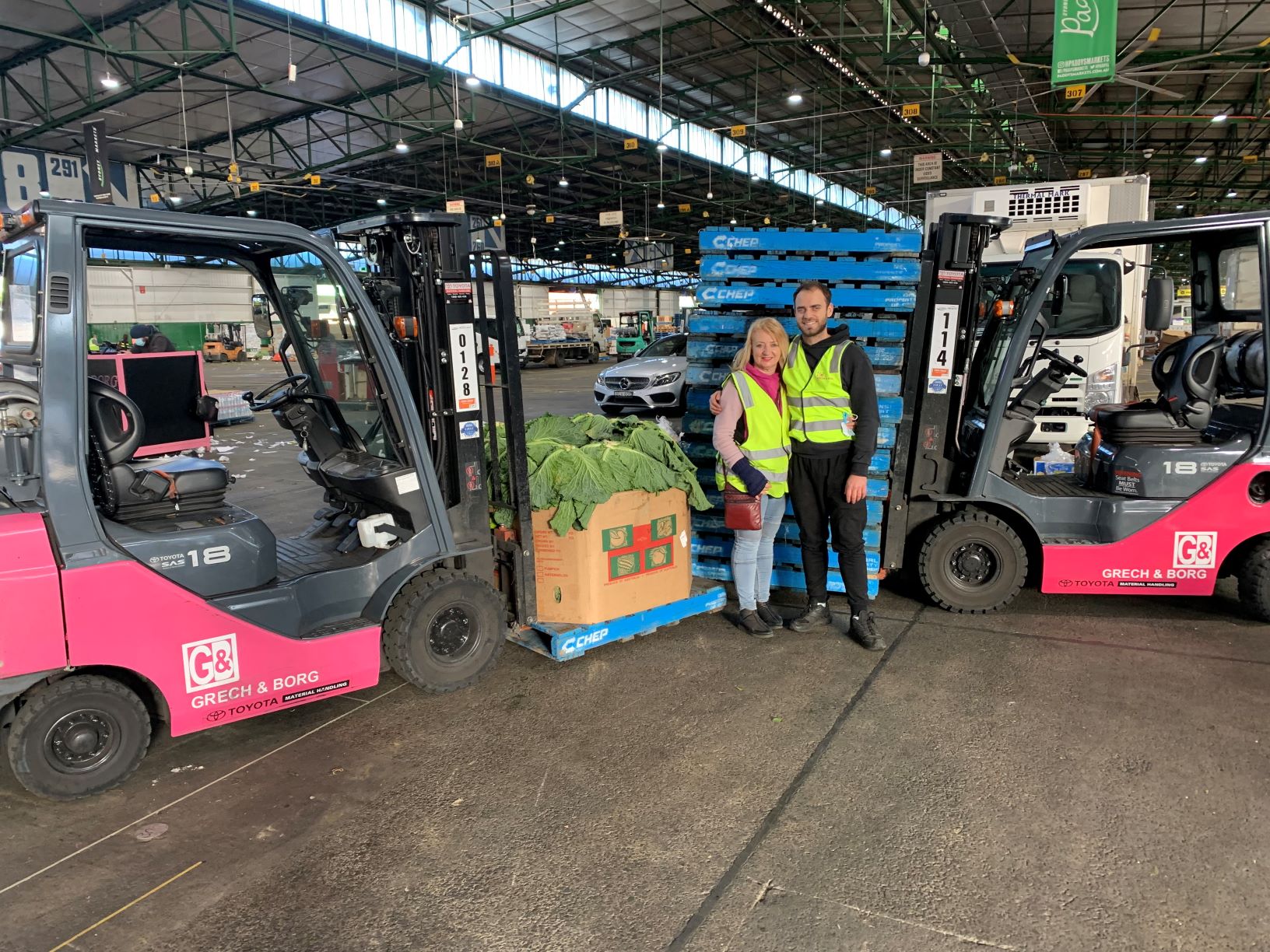