Above-average market share, organic growth and a need for more site-control have been key drivers for Toyota Material Handling Australia (TMHA) to arrange for a purpose-built, brand-new state-of-the-art facility for its Orange, New South Wales, branch.

The branch recently relocated from its former Cameron Place location to a prized position on a 2000 square-metre site at the intersection of Northern Distributor Road and Astill Drive.

TMHA Orange branch manager Richard Bopping said the new premises is an improvement for staff and customers in every way. "The old site was on the highway coming in from Bathurst and we shared the building with other units and a public car park area," said Mr. Bopping. "We were across the road from the old Bunnings, which is now empty, and also the units around us were empty. It wasn't a vibrant, up-and-coming area.

"The new building, though, is on a road with a new industrial area that is flourishing - with new developments going up there on a monthly basis, so it's nice to be a part of that," he said.

"Our new site is also just a few kilometers down the road from the new Bunnings, which is one of the biggest in NSW."

Being right on the bypass and the corner of Astill Drive, the new branch has very high visibility. "We are easily seen from the road and have prominent TMHA signage which helps customers and suppliers find the new location (although they have all been notified of the address). It's nice to fly the TMHA flag so proudly.

"At the new site are 10,000 cars going past every day and we're getting a lot more foot-traffic through the door because of that. This move will boost our presence, a lot."

Aside from a better location, Mr Bopping said a key reason for the new premises was to be able to control traffic for increased safety, both inside and outside the building.

"For the new site, safety was really driving the design. We could look at other options for controlling our yard. This was greatly facilitated by the input of our other TMHA sites and specialists, nationally.

"There is now a one-way flow through the workshop, for vehicles and equipment being processed such as for servicing or pre-delivery for new units. There's also a closed-off area with no access for customers or contractors and designated delivery set-down and pick-up areas, which are isolated to be much safer."

The previous site's workshop was also proving to be too cramped, given the branch's increasing growth in Central Western New South Wales. "We operate across a massive area stretching as far out as Bourke, Cobar, Dubbo, across to Mount Vic and even occasionally Broken Hill and down to Cowra, and everything in-between such as Mudgee, Forbes, Parkes, Narromine," Mr. Bopping said.

"We hold 50-70 percent of the entire forklift market in our region, which is significantly higher than the national average.

"Our core business is our forklift rental fleet, which is over 200 units-strong and is serviced out of the branch. We have more than double that, again, with retail customers that we service and provide parts and repairs for.

"We also deal in warehousing equipment such as electric pallet jacks, stackers and also skid steers loaders. New products have come online recently - such as sweepers, scrubbers, scissor-lifts, vertical lifts and the Taylor Dunn product line - to name a few. These are opening opportunities for us to expand into other markets and with our new premises we are well-placed to support our expanding range," he said

Success, though, was putting pressure on the former site's key facilities. "One of the challenges we had with the old premises was that the workshop also served as a storage area, so we were quite cramped. At times we could have 20 or 25 forklifts stored in the workshop area. That made working efficiently and safely more challenging than we would have liked.

"The new workshop is about double the size of the old one and we have isolated storage areas separate to the workshop. The quality of the work coming out of the shop is of a higher standard because of this separation of duties and the efficiencies it brings."

With a site (land) size of 2000m2 and a building of 880m2 - with the office being 140m2 and another 140m2 for an office mezzanine level - TMHA Orange has ensured it has all the appropriate space it required, with the addition of future-proofing. "In the future, we would be able to support a rental fleet double the size of our existing fleet of 200 units, we would have enough provisional space in our workshop to support that," Mr. Bopping said.

After spending so long overseeing the design and build of TMHA's new Orange branch, Mr. Bopping - who started with TMHA Queanbeyan as a mechanic 18 years ago - said he is particularly proud (and relieved), of the outcome: "The idea has been 20 years in the making. We started this with a memorandum-of-understanding in December 2015 so a lot of work has gone into it, but it's been a labour of love for myself and my Service Manager, Greg Bell. We are very excited and very relieved to be in our new premises."

He is also pleased that the new building has been built for TMHA with environmentally sustainable principles in mind. "We have greatly reduced environmental impact footprint with the new building," he said "We have solar on the roof which will just-about negate any power bill and a water tank plus a greywater system for the building. And we were able to achieve all this at a similar cost to running our old one!" 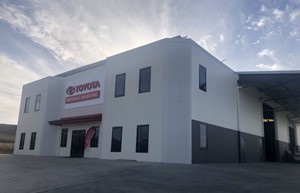