The autonomous (driverless) 1.6-tonne capacity reach forklift featuring a 10-metre mast was on display and in action at TMHA's stand at the 2019 Auspack Packaging & Processing Machinery expo - at the Melbourne Convention and Exhibition Centre from 26 to 29 March.

The Toyota BT RAE160 reach forklift (also available in 2- and 2.5-tonne capacity models) will constantly move pallets from floor position into a rack and then back again.

The forklift integrates with warehouse management systems to operate according to a customer's unique requirements. It uses a laser-based navigation system and complex range of sensors to safely and accurately handle materials, automatically.

The RAE range of autonomous material handling equipment is designed and manufactured by Toyota Material Handling Europe, with programming and installation performed locally by TMHA engineers.

The demonstrator Toyota BT RAE160 reach forklift at Auspack is fitted with optional 3D cameras which further enhance its load detection and rack detection capabilities - presently the only such offering in Australia.

"We have used AGVs in production-based applications, but this is the first time we have been able to offer AGVs for large-scale warehousing such as 10 metre-high racking and such high-volumes of pallets," said Mr Beveridge. "The RAE Autopilot series with vision-aided load-handling was specifically designed for large-scale warehouse logistics, pallet warehousing, production and manufacturing facilities."

In recent years there has been a shift towards automating warehouse logistics where conventional forklifts were predominantly used. This has been due to large fluctuations in throughput demands, leading to labour issues, improved affordability and shorter return-on-investment periods.

Mr Beveridge said the Toyota BT RAE160 reach forklift can also be operated manually, providing the best of both worlds. "A major thing that sets us apart in the market is that our Toyota BT RAE Autopilot reach forklifts are based on the manual platform and so can also be operated as a manual vehicle, as well as being autonomous. So in that sense it's actually a 'hybrid' vehicle" he said. "This makes it extremely attractive to the industry due to its ability to be used manually, helping in the transition between manual and autonomous processes. End-users are far less intimidated by the introduction of hybrid vehicles, as there is always a manual roll-back option."

Mr Beveridge said that, like manual-only Toyota BT reach forklifts, the Toyota BT RAE forklifts are very reliable and highly serviceable. "Unlike other automated equipment which tends to be customised, our AGVs all benefit from the consistency of the Toyota Production System which ensures optimal quality, durability and reliability."

In another first, the Auspack-demonstrated Toyota BT RAE160 reach forklift will be powered by Lithium-ion battery technology. "This is a game-changer for AGV systems because the battery can accept a high current, enabling short charging between duties," Mr Beveridge said. "Lithium-ion batteries charge much faster than traditional battery technology, in several short periods that align with the production cycles, without the battery running low. They are also up to 30 percent more energy-efficient than older battery technologies and charging doesn't degrade battery life as much, so they last longer.

"Also, being fully automated, our Toyota BT RAE reach forklifts can quickly charge themselves in between tasks without the need for human assistance or separate charging areas."

TMHA will also have a range of its latest-model ride-on and walkie-stacker forklifts, scrubber dryers and stock-pickers on display at its 9x14-metre stand for Auspack's duration, where it will also display a Taylor-Dunn stock-chaser.

All products on display at Auspack can be demonstrated for customers at a later date. 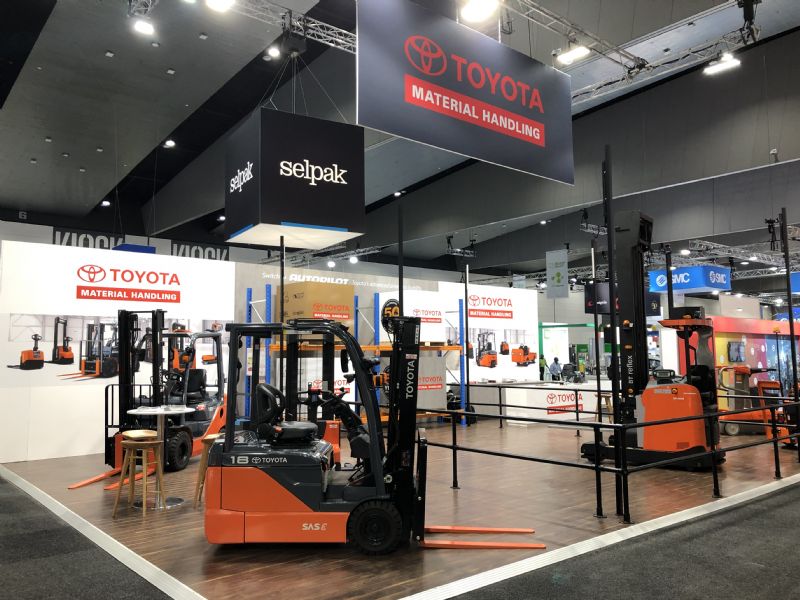