Having Toyota Material Handling Australia (TMHA) located on site at the Melbourne Markets in Epping, Victoria, has been central to wholesaler, Big Valley Produce, choosing Toyota forklifts for its operations.

The business – which specialises in buying hard produce such as pumpkins, potatoes, melons and onions, and selling it to greengrocers – recently renewed its fleet of eight 1.8 tonne Toyota 8-Series LPG-powered forklifts in a long-term rental agreement.

With a two-stage four-metre mast, many of the Toyota forklifts have windscreens and side-and-rear covers for weather protection, and mudguards. They also feature TMHA-supplied Big Valley Produce logo stickers, including one for the roof-mounted refillable gas bottle which doubles the driving range compared with a standard swappable bottle.

Vince Scarso, who co-owns Big Valley Produce with partner, Frank Bugge,  said having TMHA on site has been fundamental to him choosing – and sticking with – Toyota forklifts.

“Having Toyota on site is one of the best things,” said Mr Scarso. “If we need them, they’re right here to look after us. That’s the beauty of it and it’s what swayed us to use Toyota forklifts.”

Always operating out of the Melbourne Markets, Big Valley Produce has an extensive history with TMHA. “We’ve been using Toyota forklifts since the early 2000s, so for 20-odd years,” said Mr Scarso.

“We started out with a different brand that was quite prominent in the early days, but then the Toyota forklifts became a lot better. Combined with those improvements, TMHA came up with an attractive deal for us and we’ve been with them ever since – our forklift fleet growing over that time from a handful to the eight or nine that we have now.

“Our forklift fleet has been exclusively Toyota for the last 16 to 18 years and we’ve had TMHA supporting us within the Market for about 10 to 12 years – including the old Market site on Footscray Road, and they’ve been with us the entire time here at Epping.”

TMHA Area Sales Manager Brad White said the decision to have a permanent service centre on-site is a practical example of Toyota providing Tailored Business Solutions to its clients – one of the key tenets of the Toyota Advantage. “We established our service centre here at the Melbourne Markets to provide optimally convenient and effective solutions for clients such as Big Valley Produce, working in with their schedules,” Mr White said.

“If Big Valley was located somewhere else in Epping, they’d be dealing with an external service centre but here at the Markets we’re right on hand. This is especially helpful given the hours nearly all the business here keep, including Big Valley.

“Their forklifts are working outside what most people see as regular business hours. The Big Valley boys come in at 10 O’clock at night and can still be going at 9am the next morning. I come in in the morning, when they are winding down. If the forklifts are due for a service, we get them when the guys are finished in the morning and drop them back to their warehouse that afternoon, so they’re ready when the they walk in for their night shift.

“The differing hours is a perfect servicing opportunity so the model works really well.”

TMHA’s hours overlapping into Big Valley’s night shifts proves even more valuable if any problems with their forklifts occur on the job – something Mr Scarso is acutely aware of. “Our fleet is operating constantly so we can’t afford to lose a machine for long,” said Mr Scarso.

“It’s good to know that if something happens during the night that we can get it sorted out first thing the next morning. Someone from Toyota is there by six AM and they’ll get to fixing it for us or loan us a replacement forklift until it’s fixed. We’ve never had any problems that couldn’t be sorted.

“That’s the difference in having the support, right here. Other brands might be able to get service vans to site but they can’t do anything major.

Mr White said he is proud that TMHA is able to offer such a unique advantage at the Melbourne Markets. “With us being here, our customers know that the worst-case scenario is having to wait until the next morning,” Mr White said. “They are assured by that because downtime is a killer.

“Fortunately, we don’t get many panicked calls because it’s comparatively rare for our machines to break down.”

Mr Scarso said Toyota forklifts had proven their reputation for reliability over the course of many lease renewals. “They are a very, very reliable machine,” said Mr Scarso. “They’ve proven themselves over such a long period for us that I’m not really interested in any other brand.

“In our business, you want a forklift that’s going to keep on going and not stop. They’re required to constantly take produce from the farmers’ trucks to our warehouse. The forklifts aren’t tippy-toeing around in a comfy little warehouse, not doing much. These things do some hard yards and get bashed around. Our guys can go hard for 10- or 12-hour stints, virtually without stopping.

“Given the amount of hours they do – you’d be surprised at the number of kilometres they clock in a week – it’s even more impressive that we rarely have an issue with them.

“You only need to look at what they achieve in their working life to know it is a very good machine.”

This reputation extends beyond Big Valley’s opinion to the wider Melbourne Markets where – with around 90 percent share of approximately 800 forklifts – Toyotas are clear favourites.

Mr Scarso said reputation is a powerful force at the Markets, with word-of-mouth travelling far. “A salesman might try to give you a fancy spiel, but word-of-mouth is best.

“There are a lot of family businesses here and everyone here speaks with each other and asks opinions about their equipment.”

Mr White pointed out that reputation can be a double-edged sword. “It can work with you or against you,” he said. “You hear about the problems, too.

“Fortunately for us, TMHA has become accepted as the premium standard. The values and service from our brand have created a self-propelling demand.

“Certainly, having approximately 800 Toyotas all humming along nicely in the one spot is a great advertisement for the quality, durability and reliability of our 8-Series forklifts.”

View our range of material handling products, here or  contact us for more information. 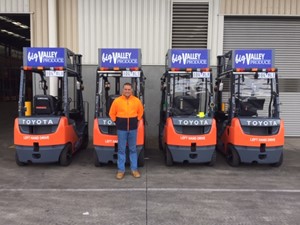