Headquartered in Brighton, near Hobart, SRT Logistics has grown from a small refrigerated food transport operation to a full supply chain management provider. With five distribution centres, it services every town in Tasmania with dry, frozen and chilled foods for customers such as Woolworths, Lion, and Schweppes, and also ships across the Bass Straight to its Melbourne depot.

CEO Rob Miller said his father, Jim, founded SRT Logistics 30 years ago before Rob and his brother Brent Miller joined the business. "My father had a refrigerated truck or two and worked with Purity supermarkets, which is now Woolworths. When I started in the family business, in 1997, we didn't even have a forklift because we didn't have a warehouse. We just worked out of the truck yard, but things grew.

"We evolved from a 'truck and a con-note', taking goods from A-to-B. Now we have warehousing and distribution. We have sophisticated freight management systems and equipment with cameras and telematics - lots of real-time data happening. We're across the whole supply chain."

Mr Miller put one of the reasons for SRT's exponential growth down to its readiness to adapt to increased food safety compliance. "In the early nineties a lot of food safety and temperature control factors came into the industry," said Mr Miller. "Compliance started to ramp up and we were able to adjust our business to meet that, whereas some other businesses weren't able to do so.

"In the nineties we won some large contracts and started distributing chilled and frozen goods for customers such as Woolworths. That was when our volume of work started to really generate and provided the foundation for us to grow the rest of the business."

Accompanying this spike in volume was a need for material handling equipment to meet such demand.

SRT started by renting forklifts from another brand however after some problems turned to Toyota Material Handling Equipment Australia (TMHA).

"Our old gear was sort of dying and running out," said Mr Miller. "Then we met (TMHA's) Rodney Jones and the business ended up buying four Toyota forklifts from TMHA.

Hobart area sales manager Rodney Jones said that from the outset it was clear that TMHA and SRT held shared business values, and similar expectations. "SRT doesn't see itself as just a service provider to its customers. More than that, it makes itself a true business partner," said Mr Jones. "We at TMHA take a similar approach. We take the time to understand the details of our customers' operations so we can help them with equipment solutions that best suit their specific needs and provide the most efficient and economical outcomes. We call this Tailored Business Solutions and it is one of the cornerstones of the Toyota Advantage."

Mr Miller said that SRT's customers conduct business at a rapid pace and expect speedy responses. In turn, it required a material handling equipment partner with swift response capabilities. "The nature of the market that we're in is that everything's fast-moving and time-sensitive for our customers," said Mr Miller. "To service our customers we need the same kind of response from our business partners - whether it be for forklifts or trucks.

"We have found TMHA's service and attention to any issues to be really good. And they have to be because service back-up is such a big consideration for our business. That's extremely important for us and therefore was key to our ongoing relationship with TMHA."

SRT conducted due diligence before making the decision, which was based on multiple factors. "We looked at the offerings from the main fork suppliers," Mr Miller said. "In the end, it was a combination of our history and experience of the Toyota forks - the longevity and consistency of their performance - the pricing of the gear and the ability for our supplier to also meet our short-term rental requirements while the new equipment was on order. All those things went into the decision to choose Toyota Material Handling equipment.

Mr Miller said the performance of SRT's first four forklifts was especially instrumental in TMHA being chosen for its latest order.

"The old machines performed really well. We never had any problems with those early Toyota forks. It's been the most reliable material handling gear we've used, so I reckon that our history certainly helped in us making our decision to purchase the latest additions to the fleet.

"We had good longevity out of that equipment - we still have a couple of those kicking around 15 years later - and expect to get the same or better out of the new machines. If you can get 10-15 years out of that type of equipment you're doing well."

Such feats of durability and reliability - another key Toyota Advantage - demonstrated by SRT's first Toyota Forklifts is made more impressive considering the business operates constantly. "We're pretty much run 24 hours per day, seven days a week and we have operated that model for most of the last 15 years," he said.

With up-time being so vital in an 'always-on' business, the reliability of material handling equipment is paramount. "If it's 2am and you have machinery break down on you it makes it hard to keep the place going. Up-time is critical for us. You need to put gear in there that you know will just keep going.

"Obviously you've got to service and look after your equipment, but you can schedule servicing, you can't schedule breakdowns."

Another example of TMHA's Tailored Business Solutions Advantage in action was being able to secure a short-term rental fleet for SRT whilst its new machines were on order. "Once we had placed the order we still needed a stop-gap solution so Rod and the guys stepped in to help round-up a temporary hire fleet to get us through until our new machines were delivered," Mr Miller said. "That also helped with our purchasing decision. Who we bought machines from was also dependent on how well they could fill the gap in the meantime."

Mr Miller said his confidence in the durability of the Toyota forklifts influenced SRT's decision to move away from a leasing model. "We'd have been less likely to buy them outright if we had concerns about their reliability - especially long-term," he said. "Toyota has a reputation for the durability of its equipment. It's reputation as such was a factor in choosing to own the equipment outright. We have faith that we will get a long service life out of the Toyota forks. Otherwise we wouldn't have moved away from leasing.

"We felt there was less risk of things going wrong. TMHA's forklift reputation and track record helped mitigate that risk and increase our confidence in making such a considerable financial commitment." 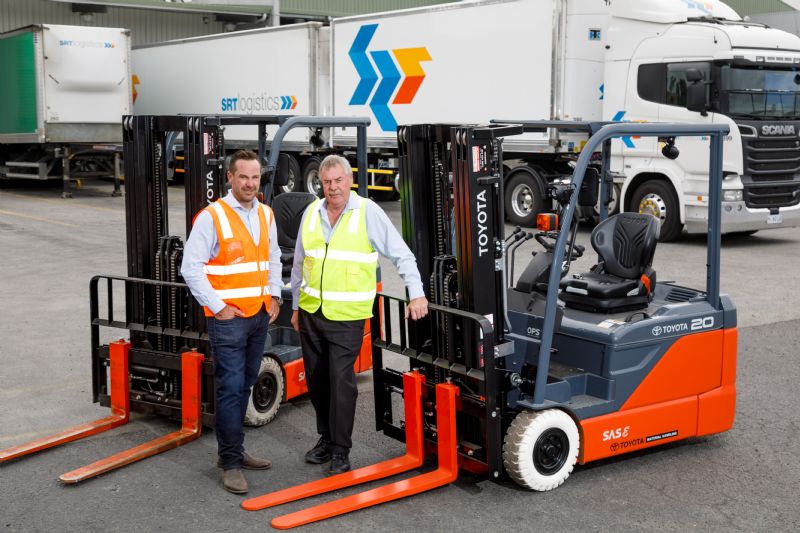