A Victorian owner-operator is claiming records for hours operating Toyota Huski skid-steer loaders and the number of machines owned.

Frank Blasi of Balwyn-based FBI Excavations Pty Ltd has clocked up more than 33,000 hours in his ten Huski loaders over the past 32 years, and has enjoyed each day's work.

"A sales guy once said to me that when you buy a skid-steer loader you're buying a lifestyle and he was right - that's what you have as an owner-operator," Frank Blasi said.

"These days I concentrate on plant hire and I'm happy to tackle whatever tasks they give me. After 32 years, I've done it all and I can level to within 10mm by eye over a large area."

Frank Blasi said he was selling hi-fi equipment for a living when a friend let him test-drive a skid-steer loader and he realised he had a flair for the work.

He bought his first Toyota Huski (a 2SDK8) in 1986 and has used them exclusively ever since, including his latest 650kg operating-load 5SDK8 machine commissioned in December 2017.

"I've had a great run with them, so I would never go anywhere else in terms of a brand, and the Toyota Material Handling people make me feel like I'm part of the furniture," he said.

"The Huskis are so durable and reliable, and they seem to love hard work. I am so used to the machines they're in my blood - I like everything about them."

"People like Frank work their machines hard and know them from back to front, Frank's ongoing relationship with the Huski product is proof that it is a great product." he said.

"Frank chooses the Huski because it is a good machine to operate, coupled with its reliability, low cost of ownership and high re-sale value," which is part of the Toyota Advantage.

Toyota Material Handling offers a comprehensive range of Huski skid-steer loaders, from the compact 4SDK4 to the powerful 5SDK11.

The popular Toyota 5SDK8 has a reliable and powerful 2.5-litre Toyota diesel engine, delivering 52 horsepower (39kW) and 160Nm of torque, and a rated operating capacity of 650kg.

Thomas Machar said the inbuilt quality, durability and reliability of the Huski skid steers is an example of the Toyota Advantage, along with a commitment to safety, parts and service, total cost of ownership and business solutions. 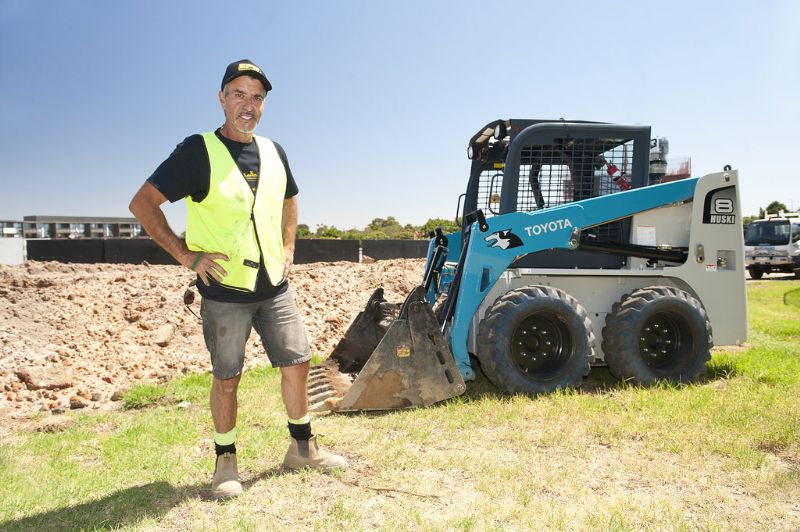