The Toyota hydrogen FC forklifts with a nominal rating of 2,500kg lift capacity will also be featuring in the official opening of the new Toyota Parts Centre in Western Sydney's Kemps Creek.

Toyota hydrogen FC vehicles take pressurised hydrogen which is fed into a fuel cell stack, where it is combined with oxygen to create a chemical reaction that produces electricity to drive various motors depending on demand for motive power or hydraulic power for steering, braking or lifting loads.

Toyota hydrogen fuel cell (FC) forklifts will be especially suitable for logistic and warehouse operations given they can be conveniently refuelled in just a few minutes, offering obvious productivity efficiencies.

Toyota Material Handling Australia General Manager - Corporate Compliance and Project Development, Bob Walmsley, said the hydrogen FC forklifts take around three minutes to fill the hydrogen tank compared with around eight hours to recharge a conventional battery. "This means we can use these forklifts more often, without having to significantly wait between charges or use second-shift batteries to achieve the same utilisation," said Mr Walmsley.

"In much the same way Toyota's range of forklift products are researched and developed using Toyota's advanced manufacturing technologies - and built to the same exacting standards of quality, durability and reliability as Toyota's automotive vehicles - our engineers collaborate across the Toyota Group to incorporate the latest technologies acquired from our automotive sector," said Mr Takacs.

"We at TMHA are committed to constantly developing new and better technologies that raise the bar in terms of safety, performance, efficiency and sustainability, which will ultimately benefit our customers. "These hydrogen FC forklifts are a clear demonstration of our commitment to the environment through the adoption of new and sustainable technologies. They have excellent environmental credentials as they do not emit co2 or substances of concern (SOCs) during operation.

The Toyota hydrogen FC forklifts and Mirai are not for sale in Australia mainly due to a lack of hydrogen refuelling infrastructure.

Toyota's mobile hydrogen fuelling station installed on a Hino 700 Series truck fuelled the FC forklifts and Mirai during the trials. 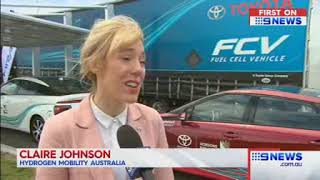