A leading national transport and logistics company has continued its two-decade relationship with Toyota after recently moving in to a new, purpose-built warehouse and refurbishing an existing facility at Brisbane's Rocklea markets.

The new fleet brings to 70 the number of Toyota Material Handling Australia (TMHA) forklifts and other equipment used by Lindsay Transport in its facilities stretching from north Queensland and down the eastern seaboard to Victoria and into South Australia.

General manager of Lindsay Fresh Logistics Bob McMillan said the company had used Toyota forklifts and other warehousing equipment for over 20 years.

"We've seen no reason to change as the Toyota forklift equipment has always proven to be reliable and dependable, and it's backed by prompt and proactive service. If any issues arise they're dealt with quickly and professionally by the team at our local TMHA branch," Mr McMillan said.

In addition to the new Acacia Ridge facility Lindsay Transport recently moved into and refurbished an existing fresh produce warehouse at the nearby Brisbane markets in Rocklea, and the adoption of Toyota's fast charge technology for its Toyota battery-electric forklifts enabled it to establish its own fumigation room.

"We have the only temperature-controlled DAFF accredited facility that includes fumigation. The opportunity came about when we no longer needed a designated battery charging area, enabling this footprint to be used for fumigation," Mr McMillan said.

TMHA corporate account customer manager Dave Bartlett said Lindsay Transport now takes advantage of fast charging in short periods of downtime rather than having to charge its forklifts for eight hours each night.

"The forklifts can be charged in period as short as 10 minutes when they're not in use," Mr Bartlett said. "This relatively new type of charging technology means you can effectively get 10 hours of battery life rather than seven, and being able to set up their own fumigation facility means they can work much more efficiently while saving a lot of time and money."

Lindsay Transport's Toyota forklifts at Rocklea markets are serviced by an on-site technician.
"Toyota is a strong forklift brand at the markets, so there's a permanent presence there and the technician stops by regularly which means there's never a problem getting something looked at," Mr McMillan said.

After originating in Coffs Harbour on the NSW north nearly 70 years ago the Lindsay Transport, Lindsay Rural and Lindsay Fresh Logistics arms of the business now operate under the Lindsay Australia banner. 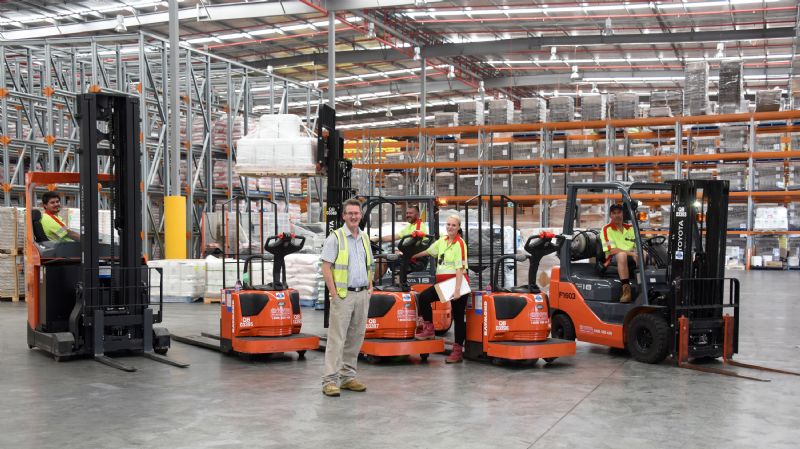