A progressive earthmoving equipment hire company has commissioned its first Toyota Huski skid-steer loader, to suit one of its long-standing clients.

It began work in June, in the Perth metropolitan area.

Business development manager for Loadex Hire, WA, Craig Warnes, said the switch in brands to Toyota was prompted by a client whose operator has been on Huski skid steers for the last 20 years.

“The client had a Toyota Huski with very high hours, but did not want to make any new financial commitments, so for three years they hired machines in from other companies,” said Mr Warnes.

“With a new job coming up, I offered to purchase the Huski to suit the client and they jumped at the notion. In addition, they had a very happy operator as he was back into a machine he’s comfortable in.”

Craig Warnes said the new loader was performing up to every expectation it is designed for, with all the creature-comforts of a enclosed and pressurised cabin with locally designed & manufacture air conditioning to suit the demanding environments of West Australia.

“As a former operator of Huski skid steers, I was very happy to see, after all these years, Toyota still maintains a very high-quality machine,” he said.

“Loadex Hire is a family owned and operated business that has been hiring high-quality earthmoving machinery to civil construction, mining and agricultural industries in Western Australia for more than 15 years,” Mr Rhodes said.

“It has a network of location service support facilities and specialises in hiring late-model machines, equipped to meet current mine-site safety requirements.”

Toyota’s popular Huski 5SDK-8 is one of a comprehensive range of skid-steer loaders from the compact 4SDK-4 to the powerful 5SDK-11. It has a 2.5-litre Toyota 1DZ diesel engine delivering 39kW, a operating load of 650kg, , dumping height of 2190mm at a 45 degree dump angle and 275mm of ground clearance. 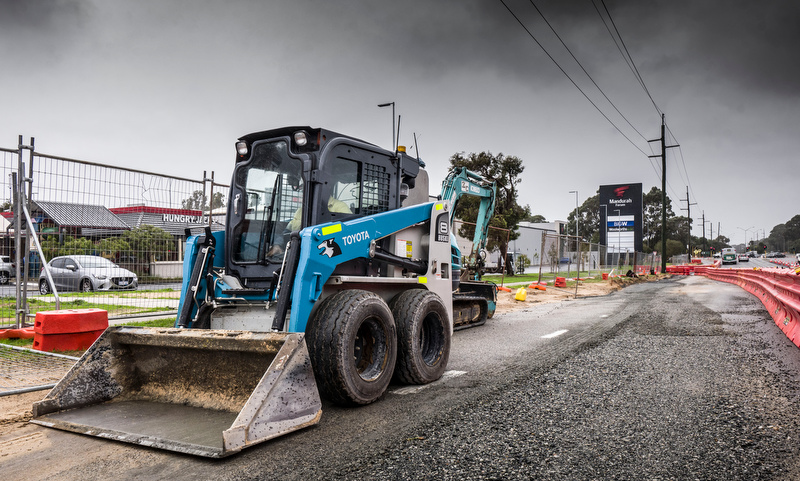