A progressive Victorian earthworks contractor has praised the fleet-footedness of Toyota Huski skid-steer loaders, after using them exclusively for six years.

“They’re light on their feet, don’t get stuck in the mud and have good ground clearance,” Mr Taylor said.

“As well as that, they’re tough, reliable, good value for money and efficient. Having a Toyota engine helps minimise the cost-per-hour and hence gives maximum return on investment.”

Mr Taylor has added to the versatility and site accessibility of his loader in damp conditions by fitting a set of Bearcat/Camso OTT tracks.

“With recent rains, I would not have been able to access half of my jobs in the last month without the tracks,” he said.

The rationale for adding the rubber tracks – which can be fitted in less than 45 minutes by experienced operators – was versatility versus the cost of another machine.

Toyota Material Handling’s Melbourne branch supplied Mr Taylor’s loader and services it every 250 hours, via a mobile service unit based in Sunbury.

Mr Taylor has been in the earthmoving industry for 14 years and his work ranges as far afield as Pakenham, Kilmore and Torquay from his base in Bacchus Marsh.

“Bill’s jobs on new housing estates necessitates operating on a variety of ground conditions,” he said.

“He could be loading his truck on the road or crossover, running across gravel and rock, or working in dirt clay and mud. The Huski is perfect for this application.”

“Adding the OTT tracks allows Bill to continue to work in this application through the wetter months of the year, without the issues and costs of operating a track loader in an application that is better suited to a skid steer loader.”

“Most operators will only utilise their tracks during the wettest three or four months of the year. This results in the tracks lasting for years and low running costs for most of the year when operating on tyres.”

The popular Toyota 5SDK8 has been tested in Australia and proven nationally.

It has a reliable and powerful 2.5-litre Toyota diesel engine delivering 52 horsepower (39kW) and 160Nm and a rated operating capacity of 650kg.

Toyota Material Handling offers a comprehensive range of Huski skid-steer loaders, from the compact 4SDK4 to the powerful 5SDK11. 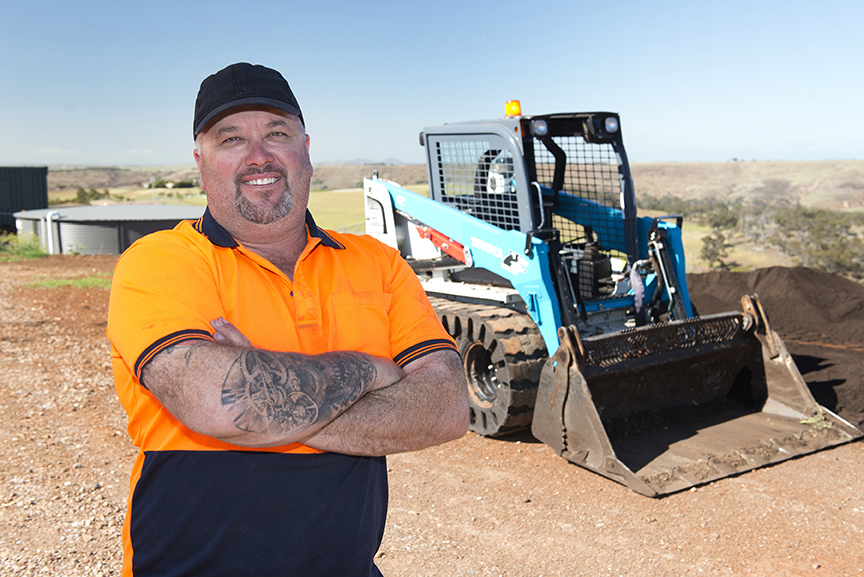