Combined Expertise In State Of The Art Distribution Centre

Oz Design Furniture supplies its 28 stores in the ACT, NSW, Queensland and Victoria and carries out Sydney home deliveries via the distribution centre located at Rouse Hill in Sydney's north-west.

Company personnel worked with TMHA Sydney staff for 10 months as the building plans were finalised to decide the most suitable mix of forklifts, stock pickers and turret trucks.

TMHA offers a 'one-stop shop' solution for material handling equipment needs and the final list of OzDesign Furniture equipment included examples of the various forklift models in the TMHA portfolio.

The pride of the OzDesign distribution centre fleet is a Toyota BT Vector VCE150A turret truck with a capacity of 800kg to a lift height of 11450mm with a customised load handler to suit OzDesign's unique 2500mm pallets.

In addition, Oz Design Furniture has enjoyed the customer benefits of the 'One Toyota' family by financing its forklifts through Toyota Fleet Management, using Hino and Toyota trucks, and the distribution centre manager drives a HiLux pickup.

"This centre reflects everything we learned from all our previous warehouses and my earlier background in automotive spare parts supply, including the input from TMHA major accounts manager Simon Brompton and his colleagues," he said.

"Stage one of the distribution centre has 5000m2 of laser-levelled floor space and a 1000m2 mezzanine. Stage two will see that expanded to 21,000m2.

"The aisles are 1.85m wide and the racking is 12.2m high, so we use laser lights, wire guidance and control magnets in the floor for alignment in the aisles and safety."

"Many of our products exceed the traditional 1168mm pallet," he said.

Mr Taaffe said OzDesign has a good relationship with TMHA and Toyota Financial Services, built on working with Simon Brompton, "who pointed us in the right direction, and of course the Toyota product".

"By adopting an all-electric forklift fleet we have no problems with noise, dust or fumes.

"Toyota does our main service every six months and we do the weekly or monthly checks."

The OzDesign distribution centre has 13 self-levelling loading docks, arranged in a saw-tooth pattern, so its Toyota forklifts can unload 40ft containers.

In a busy week, the centre receives 35 containers of stock, sends several semi-trailer loads to both Melbourne and Queensland, and dispatches 200 Sydney home deliveries.

Simon Brompton said the consultation process for the centre began in November 2014, based on the initial building plan, and the equipment order was placed in August 2015.

"The Toyota BT turret truck was assembled and commissioned in February 2016," he said.

OzDesign Furniture opened its first store in Auburn, Sydney, in 1979.

The Australian owned and operated business has since grown to 28 stores along the eastern seaboard, with a reputation as one of the leading aspirational furniture and homewares brands. 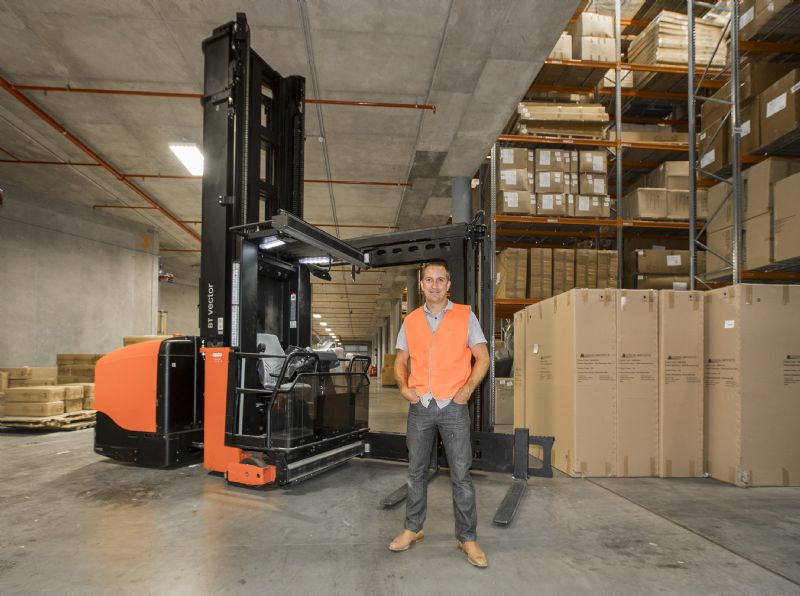