A busy Victorian landscaping and construction contractor has relied on Toyota Huski skid-steer loaders for most of its 10-year history.

Calder Landscaping and Construction purchased a Huski 4SDK8 and a 4SDK5 model not long after the company was founded in 2006. In November last year the 4SDK8 was traded in and new 5SDK5 and 5SDK8 skid-steers were purchased, bringing its current fleet of Toyota Huski skid-steer loaders to three.

For director Mark Bullows there was never a question of which brand of skid-steer loader he would use in the business.

"I had experience with other skid-steer loaders in previous jobs and I preferred the Toyota Huskis," he said. "It was a simple matter of sticking with what I know best. Based on past experience I knew they were tough, dependable and wouldn't let me down."

Mr Bullows said the simplicity of operation and reliability of the Toyota Huskis are their real strength.

"What I like most about them is that they're simple and you can rely on them to get the job done. Some of the other brands seem to lose their way by trying to over complicate things.

"With the Huskis I've never had any problems like I did with other brands," he said.

"Our customers love the fact that the Toyota Huskis are comfortable, reliable and don't have complicated electronics and computer operation. They're a solid, dependable and well-engineered workhorse, and the fact that 80 percent of our sales come from repeat customers like Calder is proof that they deliver," Mr Machar said.

Mr Bullows said the service and maintenance he receives from his local TMHA branch is also a good reason to stick with the Huskis.

"Nothing's a problem for them," he said. "One of the service technicians lives near me, and if I need him to come over at 6.30am to look at something he's always there. Any issues are sorted out quickly and without any hassle. Equipment downtime is costly in this business so having quality backup to rely on is a must."

Calder Landscaping and Construction's three Huskis are primarily used to prepare new housing estates for a number of large builders in Victoria.

Given they operate on paved and concrete paths as well as dirt, the two new 5-series Huskis were fitted with heavy duty tyres before delivery.

"Working on building sites means you can get a lot of flat tyres, but with these heavy duty tyres that's hardly ever a problem. I probably get about one-tenth of the problems I would with other equipment," Mr Bullows said. 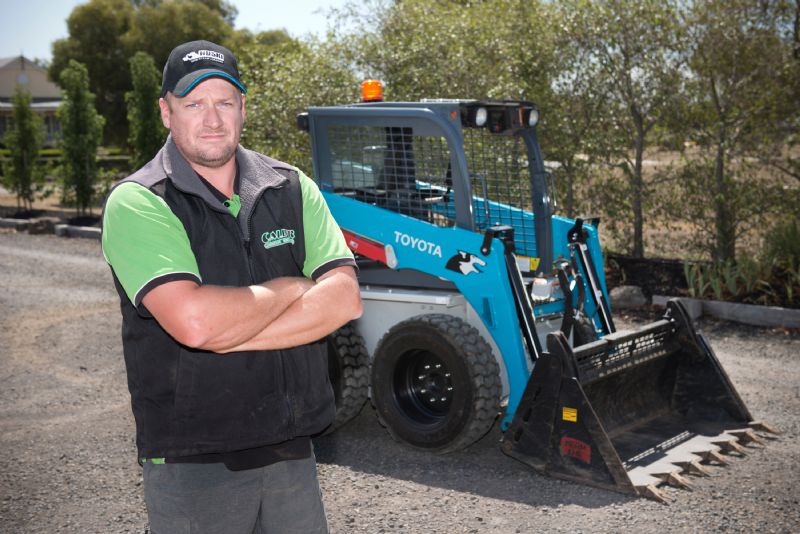