Toyota Forklifts Part Of The Package For Asia Pacific Warehousing

A specialist warehousing, distribution and supply chain business in Melbourne's western suburbs has relied on Toyota forklifts since its inception, and recently received an unexpected bonus when purchasing its latest forklift.

Asia-Pacific Warehousing managing director Rohan Meegama says he has used Toyota forklifts exclusively since establishing the business in 2008, and currently runs an all-Toyota fleet of nine forklifts at its headquarters at Truganina.

"I'd had positive experiences with Toyota forklifts before, so it made sense to stick with what you know and trust," Mr Meegama said. "We're all extremely happy with our Toyota forklifts and they've never let us down."

"After opening the new warehouse we had to consider how best to manage our forklift resources across the two sites. At one point I thought we might need another gas-powered forklift to unload containers and another reach truck for racking, but after talking to our TMHA sales manager it was brought to my attention that the 7FBE18 forklift could do both," he said.

"It was an economical and convenient outcome for them," Mr Johns said. "The 7FBE18 is a lightweight and highly manoeuvrable forklift that is able to make pivot turns, so was perfect for their requirements. The warehouse it will operate in is relatively small so there was no need for a larger, higher payload forklift or one with a high mast."

And much to Mr Meegama's delight, the decision to purchase the new 7FBE18 forklift came with an unexpected bonus.

"When I got the call to say we had won a new car I couldn't believe it. I was very surprised and happy to hear the news … it was a real bonus and we're very pleased all-round," he said.

As it turns out Asia-Pacific Warehousing is no stranger to Toyota's cars, utes and SUVs.

"We already had a fleet of Toyota vehicles for our staff, including a HiLux, two Yaris - which has now become three - two Camrys and a RAV 4, with another HiLux soon to join the fleet as well.

"We've always been happy with the Toyotas. Just like the forklifts they are comfortable, easy to use and their reliability means they never let you down," Mr Meegama said.

In an example of the broader 'One Toyota' offering that covers a range of business needs, all company vehicles are financed through Toyota Financial Services.

Asia-Pacific Warehousing is a family owned and operated business that provides a comprehensive range of warehousing, distribution and supply chain services, including wharf transport, storage, handling and distribution. 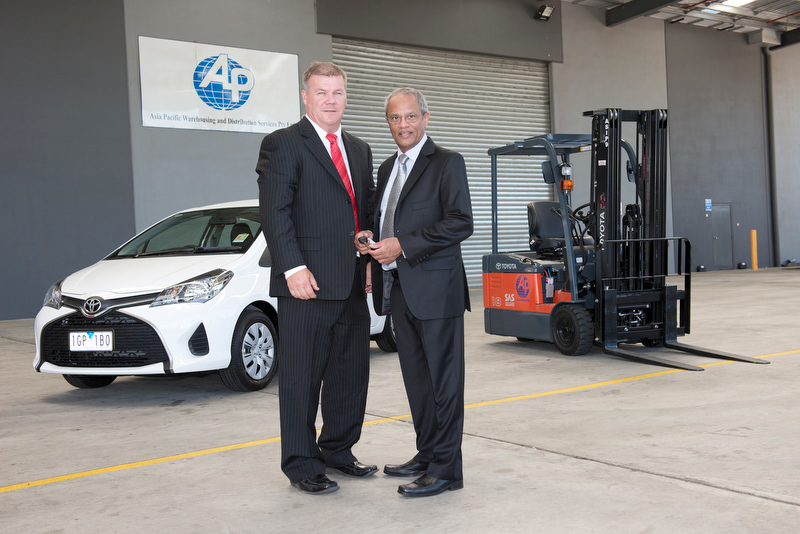