Australia's largest air conditioning manufacturer has extended its 20-year partnership with Toyota Material Handling Australia (TMHA) by being one of the first customers to order the new three-wheel battery-electric Toyota 8FBE counterbalance forklift.

Seeley International took delivery of seven Toyota 8FBE forklifts at its Adelaide headquarters earlier this year, bringing its fleet of Toyota forklifts to 10. The new forklifts have been put to work loading containers, replenishing stock on the manufacturing assembly line and carrying out other warehouse duties.

For Seeley International founder and executive chairman, Mr Frank Seeley AM, the decision to upgrade to the new 8-Series forklifts came down to the fact they offered the operational, OH&S and productivity improvements the company was looking for.

"We are pleased to be one of the first customers to enjoy the advanced safety and operational benefits of the new Toyota 8FBE counterbalance forklifts and to maintain an ongoing relationship with TMHA, which is beneficial to both companies," Mr Seeley said.

"We have sloping floors in certain areas of our site so the 8FBE's positive foot braking and anti-roll back features were essential prerequisites for us.

"Operationally, we also liked the 8FBE's tight turning circle, while its low mast height enables easier container loading, which was a real positive for us as well. The longer battery life of the new forklift is also a great asset," Mr Morris said.

Given the valuable similarities between the new 8FBE and the market-leading 7FBE it replaces, the transition to the new forklifts has been a smooth one.

"Our staff haven't had any problems operating the new forklifts - they're as sturdy, functional and reliable as ever," Mr Morris said.

"The bright LED lighting is great, especially for our nightshift. The longer battery life means our whole production shift can be covered without the need for recharging, with the added bonus of avoiding associated downtime."

TMHA South Australia area sales manager Ben Lucas said it was pleasing to see a long-term TMHA customer such as Seeley International enjoying the benefits of the new 8FBE forklifts.

"It's terrific that the time for Seeley International to upgrade coincided with them being one of the first customers to enjoy the advanced safety and operational features of the new Toyota 8FBE counterbalance forklifts," Mr Lucas said.

The smallest counterbalance forklift in the Toyota range, the compact Toyota 8FBE was introduced to provide excellent manoeuvrability and efficiency, coupled with the highest safety standards.

New motors and controllers in the Toyota 8FBE increase operating time by an outstanding 20 per cent in standard mode compared with the superseded Toyota 7FBE.

Improvements made to the System of Active Stability (SAS) include new Automatic Vehicle-Speed Control that manages the forklift's speed, acceleration and deceleration according to lift height and load weight, assisting with stability in transporting loads and preventing lost loads.

New Automatic Turn-Speed Control regulates the forklift's turning speed according to lift height and weight as well as desired turning radius, providing stable turning and reducing the chance of a vehicle tip-over.

Seeley International is Australia's largest air conditioning manufacturer and leads the market in the design and manufacture of ducted and portable heating and cooling products for the domestic, commercial and industrial markets in Australia and abroad

Founded in 1972, Seeley International has factories in Adelaide and Albury and exports its products to more than 120 countries. 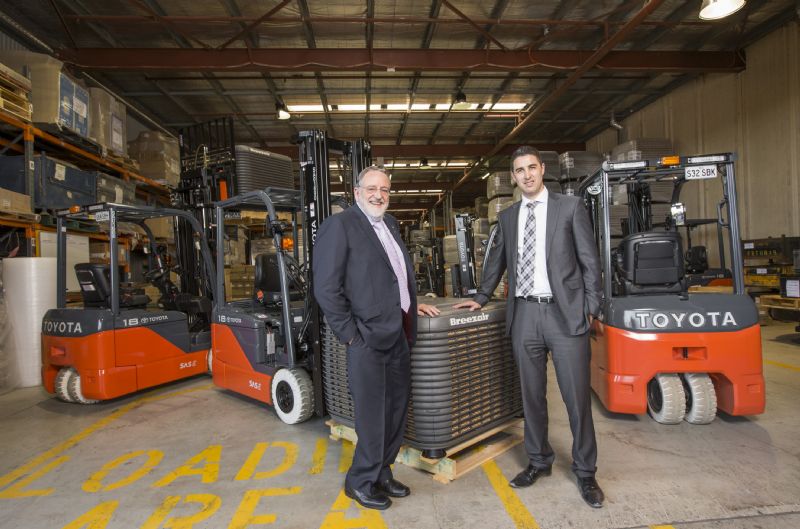