A second-generation West Australian earthmover has commissioned a new Toyota Huski skid-steer loader, based on the belief that the ability to carry out safe, high-quality work begins with the right choice of equipment.

Joe Mammoliti's new Toyota Huski 5SDK8 skid-steer loader is the third new Huski he has purchased in the last decade for his company, Tonca Earthmoving.

Mr Mammoliti's father Frank has operated skid-steer loaders for more than half a century. Joe established Tonca Earthmoving when he joined him nearly 15 years ago.

"I bought my first Huski skid-steer loader in 2004 and I've had no regrets since," he said. "The latest Huski 5SDK8 is quick, reliable, easy to operate and comfortable.

"I need reliable machinery to carry out works: I can't afford to have machinery break down without support," he said.

"Toyota's Perth branch is always there to support me, either in the workshop or with the mobile service vans."

"Joe does a lot of council work, which requires high standards of presentation and safety, and he takes great pride in both," Mr Cross said.

The 650kg operating load 5SDK8 is the top-selling model in the comprehensive Huski skid steer loader range. Tonca Earthmoving's latest addition has been well equipped for a variety of jobs with a standard bucket, rake bucket, brick forks, Harley/power rake and broom/sweeper.

"Nothing is too much trouble for Toyota Material Handling, whether it's dealing with the sales department or when customising a skid-steer for optimum safety," Mr Mammoliti said. "Our new Huski has a rear-camera system, flashing light and high-visibility stripes to ensure we comply with WH&S guidelines.

"Safety and efficiency is paramount in the earthmoving business and it cannot be achieved with sub-standard equipment," he said.

Toyota Material Handling offers a range of Huski skid-steer loaders to cover a variety of needs, from 'mini' models for limited-access jobs right up to the 900kg operating load 5SDK11. 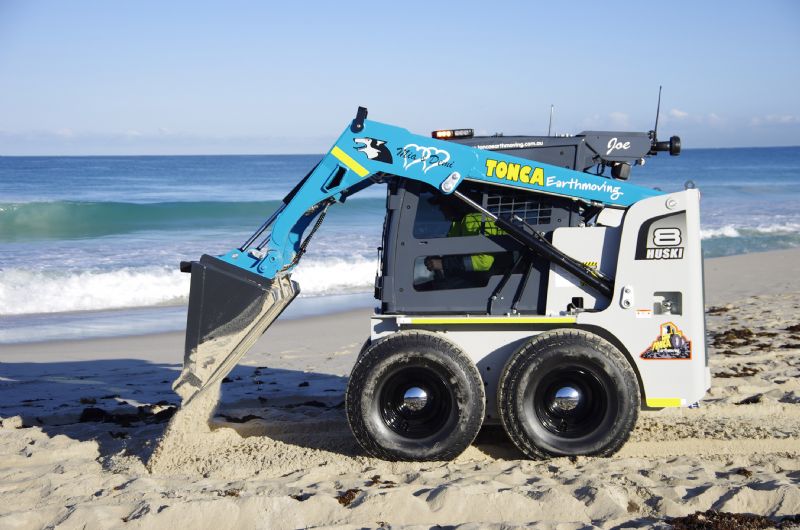