Toyota Material Handling Australia (TMHA) has presented the winners of its 2015 National Skills Contest with their awards at a gala dinner at the Sofitel Hotel in Sydney.

Fifteen Toyota forklift technician finalists competed in this years' contest held over June 10 and 11 at its Moorebank headquarters in Sydney.

The 15 finalists (made up of nine technicians and six apprentices) were among 160 Toyota forklift technicians from the TMHA national branch network who entered in this years' competition.

Entrants completed two online exams prior to the skills contest; those who achieved top scores earned the right to compete at the finals held at TMHA's Training and Development centre.

Contestants completed a series of practical and theory-based exercises over the two days that covered the three TMHA brands of warehouse equipment - Toyota, BT and Raymond. The nine technicians specialised in one of the three brands for the practical component and also sat an exam covering all three brands to determine the overall Master Technician.

Rohin Chamberlain from TMHA Coffs Harbour was crowned National Technician of the Year for Toyota products, while Shaun Xerri took out the BT award for the third straight year after backing up his previous wins in 2014 and 2013.

In the apprentice category Mitchell Houley from TMHA's Albury branch went back-to-back to win the 2015 Apprentice of the Year Award having claimed the same title in last years' competition.

All winners received a cash prize and the Master Technician and Apprentice of the year also will also attend a study tour to one of the Toyota overseas assembly plants in Japan, Sweden or the US.

The five winners were presented with their awards by TMHA president and CEO Akihiko Namura and executive vice president and COO Steve Takacs at the dinner on Friday June 12.

Mr Takacs said the National Skills Contest was an important part of ensuring that Toyota forklift technicians have the skills and knowledge required to remain at the forefront of industry standards.

"I know the importance of having highly skilled and well trained technicians as that's where I began my Toyota career," he said.

"As a national competition it's pleasing to see so many of our branches represented, highlighting the high degree of knowledge and skill within the TMHA national branch network.

"Conducting the skills contest provides real benefits, with greater customer satisfaction thanks to less downtime and improved workplace safety, and as a strong, viable company that is continuing to show strong growth we are proud to be able to hold competitions such as this."

TMHA has conducted the National Skills Contest for more than two decades as part of its commitment to maintaining industry leading training and service standards. 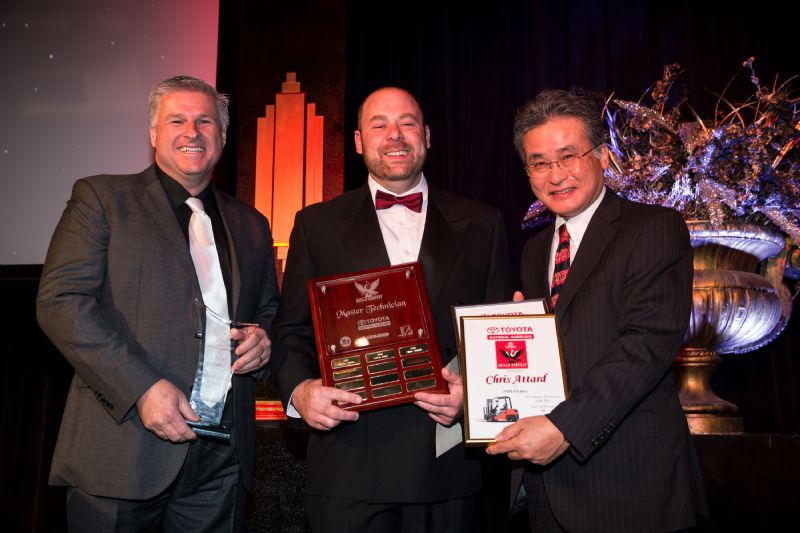