A leading timber and hardware supplier with a history going back over a century recently replenished more than half of its 40-strong all-Toyota fleet of forklifts.

Bowens Timber and Hardware ordered 24 new 8-Series 8FG 4-tonne and 2.5-tonne forklifts to replace existing Toyota forklifts that had reached the end of their rental term.

For the family-operated and privately owned business the decision to re-commit to Toyota forklifts was as much about the relationship with the brand as the quality and features of the equipment itself.

"Anyone can sell you a forklift: it's what happens later that really matters," said Mark Woollard, Bowens OHS group manager.

"Our experience with Toyota is that it makes quality, state of the art equipment, so in that sense it wasn't a hard decision to make.

"We looked at a range of providers, from smaller ones to other big operators like Toyota, but it was Toyota Material Handling Australia's (TMHA's) willingness to show us what goes on behind the scenes that really won us over," Mark said.

"We were invited to TMHA's Melbourne branch where we met the key back-up and service staff and managers, giving us an insight into the business and how things are done."

Mark says that TMHA's willingness to take Bowens behind the scenes and treat them as a partner was greatly appreciated.

"As a family-owned and operated business, building and maintaining lasting relationships is really important to us. We were able to see that TMHA is growing and investing in new technicians to support the business, and that's a positive for us, as Bowens is a business that is focused on continuous improvement," he said.

Bowens also had specific requirements in relation to servicing and maintenance of the new forklifts, which TMHA was happy to accommodate.

"We had KPIs regarding service and response times, and arrangements for replacement items if major servicing is required. With a business like ours if an important piece of equipment like a forklift is out of action for a period of time it can have a detrimental flow-on effect.

"TMHA was receptive to our needs and willing to meet these requirements," Mark said.

TMHA Melbourne area sales manager Darren Smith said the arrangements with Bowens are a good example of the way in which TMHA can partner with its customers to meet their individual needs.

"We were only too happy to give Mark and the Bowens team an insight into our business and what we could offer them, and I'm pleased to see this long-term relationship extend even further to the benefit of both parties," Darren said.

Toyota's 8-Series forklift range includes safety features like Toyota's exclusive System of Active Stability, which helps reduce the likelihood of roll-overs, and load-sensing power steering that adjusts the amount of power-steering fluid according to the load burden on the rear axle to reduce energy loss.

Bowens' origins go back to the late 19th century, and it now operates 13 building and hardware stores located throughout Victoria. 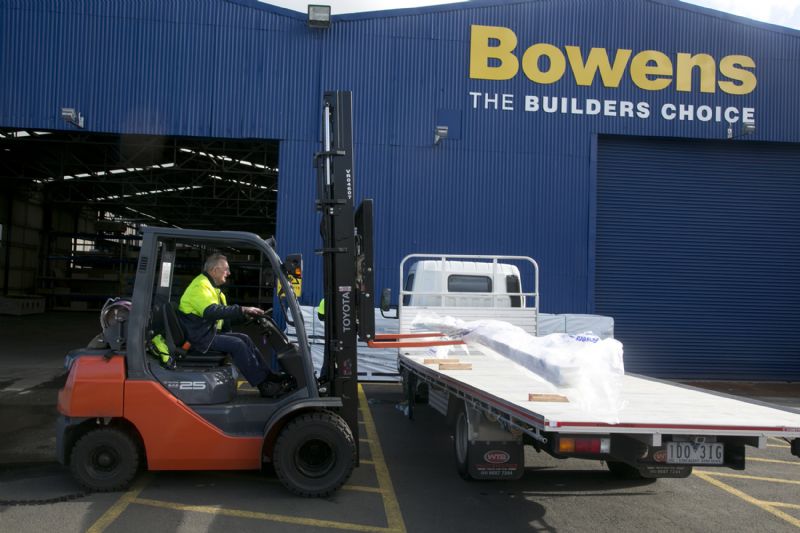