1st Choice Group based at Upper Coomera also has a new tipper truck built by
Hino, another member of the Toyota group of companies. The company commissioned its new Toyota Huski 5SDK-8 skid-steer loaders late last year, one as a replacement for an earlier model Toyota 4SDK-8 and the
other as an additional unit.

"Toyota is tops for reliability, operator-friendliness and serviceability,"
Mr Northcott said. "I wouldn't consider any other skid-steer loader. The serviceability is impressive; I know that from doing the service in-house. There is easy access to the key components and the fact that so little maintenance is required keeps the machines 'in the dirt' for longer."

"Being in the earthmoving industry is not just a job for our family-run
business: it is what we do best and what we know best. In terms of civil works, last year we completed a 10-acre mushroom farm at Yalata, halfway to Brisbane. More recently we completed a new service station/convenience store on the Gold Coast," he said.

"We bought our 700 Series Hino FS2848 truck four months ago to haul our
tag trailer, which weighs 20 tonnes when loaded. I am looking for longevity, so
I chose a truck from a proven brand with power and a big gearbox," he
said.

"I called area sales manager Syd Williams to place the order and within
days he was here with the two new Huskis," he said.

Mr Williams said he wasn't surprised that Travis and the 1st Choice team had
invested in loaders and a truck from the Toyota Group of companies.

"He loves Toyota, as most Queenslanders do," Mr Williams said.

The Toyota Huski 5SDK-8 is one of six Huski skid-steer loader models offered
nationally by Toyota Material Handling. It has a spacious cabin opening for smooth entry and exit, along with an easy-to-read instrument panel and low vibration and low fatigue control levers, providing outstanding operator comfort. 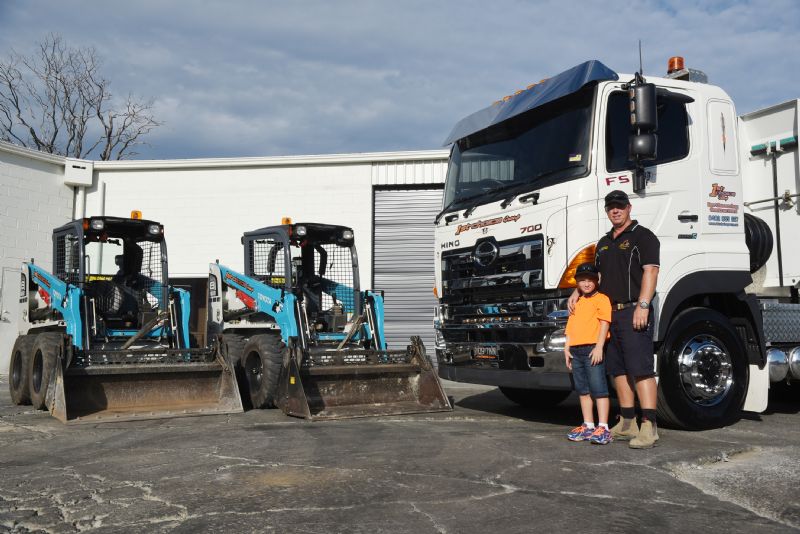