An expanding logistics company is benefiting from employing a wide range of Toyota Material Handling (TMH) equipment at its warehouses in Perth and Melbourne.

"We've always had Toyota forklifts and we now use a variety of TMH brand products, including Toyota forklifts with clamp attachments, as well as the BT reach loaders, Raymond ride-ons and electric counter-balance machines," said director Craig Walker.

"Company founder Paul Parton and I both had positive experiences with Toyota equipment in the past.

"It's a renowned and respected name and we knew we could rely on the service and backup, so we didn't feel the need to consider another brand," he said.

"The fact we've purchased some of the forklifts we had previously rented shows our faith in the product; we knew the service of those machines was up to date.

"The variety of equipment on offer was a plus too as we knew that there would be a machine to handle every job as our needs changed."

Mr Walker said Parton Logistics has enjoyed a strong relationship with the Kewdale TMH branch in Perth, and in particular with Area Sales Manager Tony McGuire.

"Tony has been terrific and proactive too. He was here just recently to tell us about Toyota's order pickers which we might need for a job we've tendered for, so if that's a success we'll probably be broadening our range of Toyota equipment even further."

Mr McGuire said Parton Logistics is a prime example of a company reaping the benefits of employing the range of equipment provided by Toyota.

"As the company has grown we've been able to help them out with a range of equipment beyond forklifts. They're a great example of the breadth of products TMH can offer its customers across the Toyota, BT Lift Truck and Raymond range," Mr McGuire said.

"It's there as a backup and is still going strong - it's a real testament to the reliability and longevity of Toyota equipment," Mr Walker said.

Paul Parton founded the company in 2004 with one 600m2 warehouse. Craig Walker bought into the business in 2006 and growth in Perth led to a larger warehousing and distribution facility being opened in 2007.

In 2009 a facility was opened in Noble Park, Melbourne - close to both the Mornington Peninsula and Yarra Valley.

"We now have a 9000m2 warehouse in Kewdale, another 4000m2 of warehouse space in Welshpool and a 15,000m2 wine distribution centre in Melbourne," he said.

In April the company commenced a new contract to store and distribute kitchen appliances for a leading home appliance company in Western Australia. 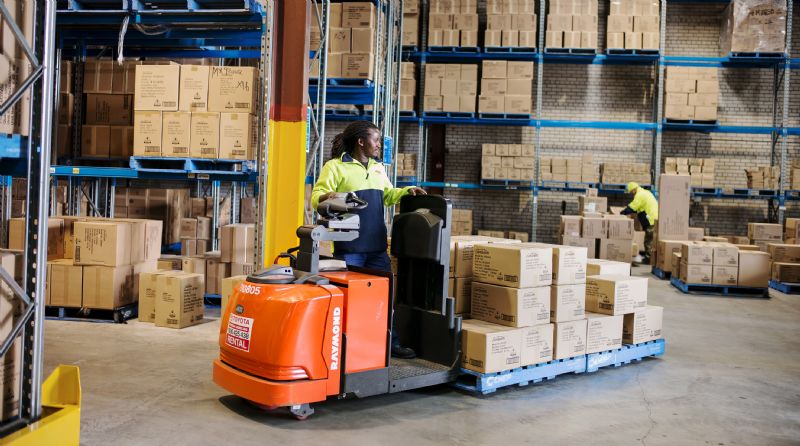 Parton Logistics with their new pallet truck from Toyota