A specialist fresh fruit and vegetable unloading company has a unique fleet of two-tonne payload Toyota forklifts to handle the added weight in bins of 'hard produce'.

Director Joy Guy said the additional payload of the Toyota 32-8FG20 forklifts suited the company's needs when unloading bins of hard produce such as potatoes, onions and watermelons.

"A produce bin typically holds 500kg of fruit or vegetables, but with hard produce it can weigh up to a tonne and the forklift has to lift two at a time," she said.

"The added lifting capacity really counts; one of the other unloading companies here borrows one of my 32-8FG20 forklifts when they need to unload hard produce.

"We have been using Toyota forklifts since 2008 and recently commissioned an additional Toyota forklift through Toyota Material Handling salesperson Scott Bocksette, giving us 10 in total.

"Our operators find the Toyota forklifts more stable for the work here in the markets and hence feel more comfortable on them," she said.

"They're fitted with attachments to weigh the produce as it is unloaded."

"We unload the trucks that come in from growing areas and sort the produce for the various selling agents," she said.

"We have three tray-top trucks that operate only within the markets, delivering up to 10 bins at a time to the agents.

"One of our forklifts and operators go around to the various agents with each truck and unloads it for them."

The Toyota 8-Series 1 to 3.5-tonne compact internal combustion forklifts have leading design and safety features, such as Automatic Fork Levelling Control to level forks during loading, the Toyota System of Active Stability (which locks the rear axle to help reduce the potential for lateral tip-overs), digital weight scales, electronic fuel injection and a closed loop LPG System with a catalytic purifier. 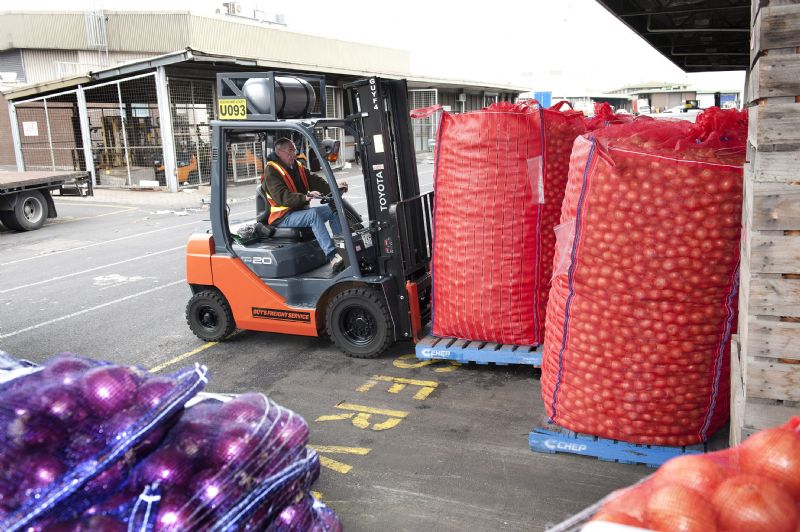