The New South Wales Rural Fire Service (NSW RFS) has chosen a Toyota forklift for their new regional complex on the North Coast.

It is the first time the service has commissioned a forklift truck in the Northern Rivers zone.

The new Toyota forklift provides logistical and aviation support at the Casino Airport facility, including the ability to load bottles of fire-fighting foam. It is also used for pallet racking and storage operations.

The NSW RFS Northern Rivers zone manager, Michael Brett, said the ability of the forklift to operate on grass as well as hard-stand area was a key reason for selecting the Toyota 8FD25.

"The safety features of the Toyota forklift and the ready availability of service were also important to us," he said.

"Toyota has a branch and service vans based in Lismore, just 33km or half an hour away by road."

"The Toyota 8-Series forklifts offer leading design and safety features, such as Automatic Fork Levelling Control to level forks during loading and Active Control Rear Stabiliser, which locks the rear axle to help reduce the potential of lateral tip-overs," he said.

The NSW RFS had its beginnings more than 100 years ago in the south-western town of Berrigan, when residents banded together to form the first official fire brigade in the bush.

Today, the NSW RFS is the world's largest fire service, with more than 2100 rural fire brigades and a total membership of just over 70,000. 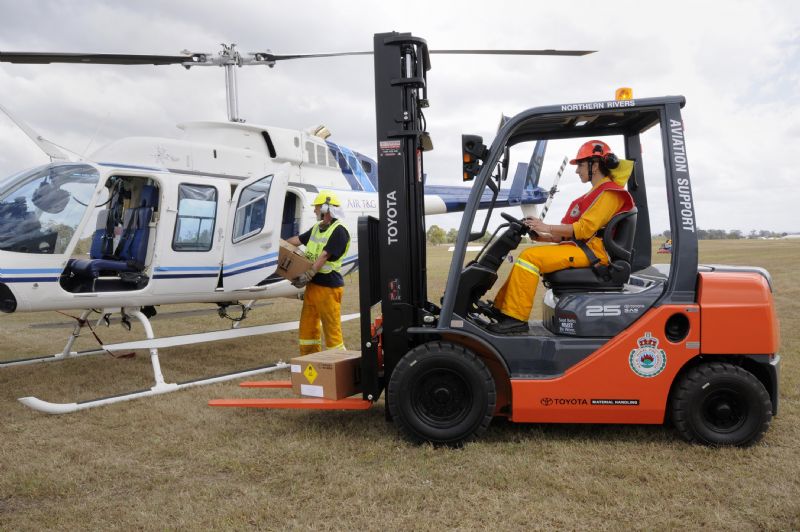 Toyota forklifts being used by the NSW RFS