A massive Queensland warehouse - flooded to a depth of 1.8 metres on 12 January - has returned to operation with a new fleet of Toyota Material Handing forklift equipment.

The flood destroyed stock and the warehouse's entire fleet of battery-electric forklift equipment.

When it returns to full operation, the 19,000 square metre warehouse will have 31 state-of-the-art pieces of mobile forklift equipment - all supplied and serviced by Toyota Material Handling (QLD).

TMH (QLD) has a service technician permanently on site.

The centre has racking to nine metres and is temperature-controlled between 22 and 24 degrees.

"We returned to a Centre caked in mud - and all our material handling equipment ruined. We didn't have a telephone system for 10 weeks, so we had to use mobiles," he said.

Brett Roy said 50 vans operate out of the Centre, many delivering twice a day to metropolitan Brisbane, the Gold Coast and the Sunshine Coast.

"In addition, there are a dozen line-haul trucks which move stock to North Queensland and into northern NSW.

"The equipment is state of the art, right down to the battery charging system TMH Qld has built for us," Mr Roy said.

It has a second-shift function, battery electronic queuing system and auto watering system.

This equipment ensures that forklift operators select the most suitable battery - one that has finished charging and cooled down. The water levels are automatically topped up as the batteries charge.

API was founded in 1910 and is now one of Australia's leading health and beauty companies principally through its network of over 300 Priceline and Priceline Pharmacy retail outlets. 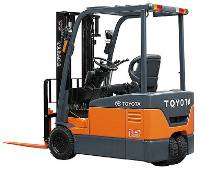