It is also a cleaner fuel, with lower emissions of particulate matter and oxides of nitrogen (NOx) than other fossil fuels.

CNG also has the safety advantage of being lighter than air, compared with heavier-than-air LPG - where any leaked gas concentrates at floor level.

FRM Toyota sales executive David Oudman said a company with a large forklift fleet (more than 20 forklifts) could save more than $100,000 a year by switching to CNG.

"TasGas has put together an attractive package in which the customer can start saving money from the first week they switch to CNG," he said.

Tas Gas launched the scheme by unveiling the first four CNG-powered vehicles in the state - including a Toyota 8FG25 forklift and two Toyota Aurion cars.

"Petrol, diesel and particularly LPG are subject to Northern Hemisphere demand and price requirements, as well as exchange rate variations," he said.

"CNG may already be supplied to many sites through the natural gas distribution network, so vehicles can be filled from an on-site compressor unit connected directly to that supply.

"This alleviates the handling of LPG bottles, along with the OH&S issues and potential supply issues."

Mr Oudman said the use of CNG as a complete vehicle fuel is rapidly increasing. 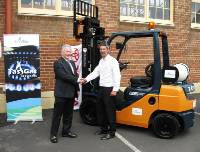