Mario Vella, proprietor of Bossley Bobcats, bought his first Toyota Huski skid-steer loader when he founded the business in 1999.

It is a 'top-of-the-line' specification model with factory-fitted air conditioning.

He bought his first Toyota Huski after realising all the owner-operators he worked with used Huskis.

"I was working for a swimming pool excavator and all the skid-steer contractors he used had Huskis - they swore by them," he said.

"I bought one in 1999 to found this company and I've never looked back. With a Toyota, you can't go wrong. They're powerful, comfortable and durable.

"I've had the latest one for nearly two years; it's done just over 1300 hours - mainly landscaping work.

"On Fridays I have a regular job performing recycling work. For the rest of the week I could be working anywhere in the Sydney basin; as they say, have truck, will travel."

Mr Vella said his Huski 5SDK-8 skid-steer loader is a pleasure to operate.

"The latest 5-Series is a good machine to drive. It's powerful and comfortable, and it has those proven Toyota features of strength and durability. You never have any problem lifting loads, that's for sure.

"As well as the machine quality, I've been impressed over the years by the level of service support from Toyota," he added. "Area service rep Corey Denford and his technicians are always on call to assist.

"Earlier this year, they visited with the Toyota engineers from Japan and I gave some feedback 'from the operator's viewpoint'," he said.

Toyota Material Handling offers a comprehensive range of six Huski skid-steer loaders nationally, from the 4SDK4 to the 900kg-operating load 5SDK11 - the largest model in the 5SDK skid-steer loader range.

Customers can order the Huski skid-steer loaders from the factory with a range of control options, including ISO and 'H' control steering pattern (which does not require the foot pedals).

Optional special features in the Toyota 5SDK Huskis include a push-button for 'ride control', to avoid fore/aft pitching when the loader is travelling.

Factory-fitted options include hi-flow hydraulics, which increase hydraulic power by more than 40 per cent at the touch of a button. This allows for added versatility with specialised attachments such as slashers and large-capacity brooms. 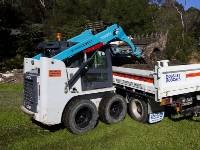