Grass sporting surface experts, SportsGrass Solutions, has chosen Toyota Huski skid steer loaders to be the backbone of its business for nearly 40 years.

The Sydney-based operation comprising father-and-son team, Warren and Jason Jones, specialises in all aspects of turf renovation and reconstruction, from bowling greens and cricket wickets - including the Sydney Cricket Ground - to golf courses and tennis courts. "Anything that isn't artificial grass and mainly sports grass, with bowling greens being our core business," said founder, Warren Jones.

Mr Jones senior, Warren, has been a Toyota Huski fan since the first model was launched in Australia, in fact, even beforehand. "In those days Toyota Material Handling equipment wasn't released here, and we had a different brand, and a very different experience - not for the better, either," Mr Jones said. "The American skid steer loader I had went through eight transmissions in its first year of operation. Then I went with a different American brand and that machine was breaking down all the time. It was breaking chains and had oil leaks and I had to replace all the pins and bushes every few months.

"Then Toyota released a machine it called a Razzler and from that point everything changed." Mr Jones said he immediately enjoyed formerly unknown reliability from his Razzler. "Not having all that extra time dealing with headaches was the biggest thing, in all honesty," he said. "In the four years I had that machine we didn't change a bush. No chains broke. It was just super-reliable. It had big tanks at the side and was an ugly looking thing, but I fell in love with it.

When Toyota Material Handling Australia launched the SDK8, Mr Jones, who had a reputation as a skid steer loader stuntman, was invited to test it out. "I was offered to have a go on it and I asked the TMHA bloke if I had to baby it, or whether I could get stuck into it. He said they wanted it to get a really hard work-out and to let him know if even one nut came loose. So, I had it going over hills, had it on its end, playing tricks with it. One of the managers was watching and was quite impressed with the Huski's performance. So was I: I bought one right away."

Thirty years later, SportsGrass Solutions' SDK8 is still going strong and, with a fresh coat of paint, defies its age. "It has been unbelievably reliable", said Mr Jones. "It doesn't stop."

Asked if there's a secret to its longevity, Mr Jones replied: "Just regular services to keep it going. Make sure the oil is good. Make sure it is warmed-up of a morning. If you warm up the machine and don't put it onto a hard job straight away, everything will work just right.

At 69 years old, Warren Jones is still one of the most skilful skid steer operators in the industry - an opinion shared by greenkeepers and his son, Jason, alike. "I love to watch dad work and could never stop learning from him," said Mr Jones junior. It's great to still work alongside him. It's easy to get along with him because he's my best mate."

Although the SDK8 still forms a regular part of SportsGrass Solutions' fleet, Jason Jones decided he needed another machine to service their business' growing demands and purchased a Toyota Huski 5SKD5 skid steer loader last year. "It was only natural that we get a newer version of the older machine, but I'll never get rid of the old SDK8. That's been a huge part of my life: I remember as a kid there was a poster that had the catchphrase: 'Toyota Huski - top dog in the dirt' and I'd draw pictures of them saying 'this is my favourite machine'."

Jason Jones said a notable difference with the 5SKD5 was its comfortable cabin, its stability and its operability. "It has a big cabin with more legroom and a suspension seat. It's quieter and the controls are more ergonomic and respond so quickly. It feels like a glove on your hand. You feel like you're part of it."

The 5SKD5 was fitted with wider wheels with a low-profile tread in order to have less impact on grass working surfaces. A plain soil bucket is preferred by the Jones' for its light weight, allowing more soil to be carried and rapid loading.

With a high lift capacity, the 5SKD5 can also load a full-sized truck. "That allows us to perform an additional service on the job with the same machine," Jason Jones said. "You don't have to bring an excavator in."

Predictably, the 5SKD5 has also proven highly reliable. "Reliability is everything for our business," he said. "We can't afford to have a machine break down on us, especially at this time of year which is silly season for the grass surface industry. We're booked solid for months and months.

"The Huskis are bread and butter for us. They're like our silent partners in the business."

He said the longstanding relationship with Toyota Material handling Australia has been an important factor in SportsGrass Solutions' success. "It's important for us to partner with a brand that has a reputation for quality, performance and durability. That's what we want our business to be associated with.

"I have actually had customers tell me that the reason that they use us on jobs is that they know our machines won't break down. A customer told me he's had people pitch for jobs with other machines he just wasn't prepared to risk.

"With Toyota's backing, the reliability is always there and it's proven. They don't break down, so why would you change?" 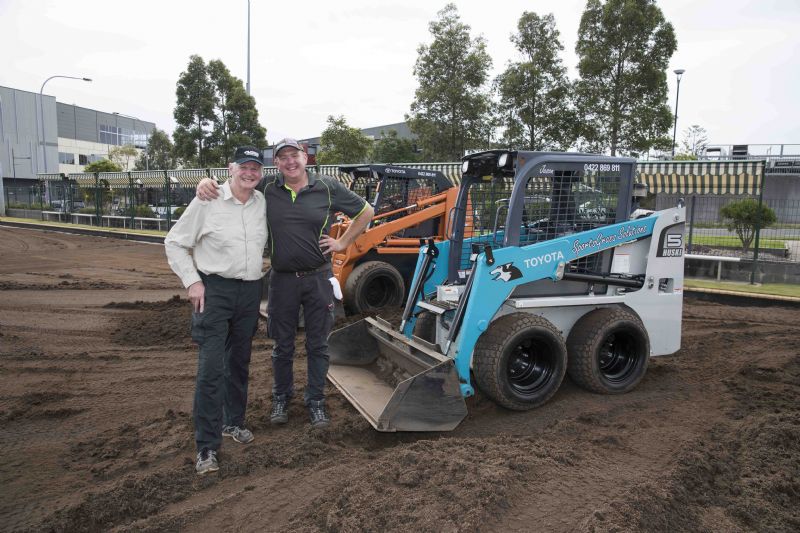