A cotton ginning company in western New South Wales has taken advantage of the many accessories available for its Toyota forklifts to meet the requirements of its unique application.

North West Ginning began operating in 1991 and has used Toyota forklifts for close to a decade. The company recently took delivery of two new Toyota 8FD25 engine-powered counterbalance forklifts fitted out with 'cotton spec' accessories for use at its ginning plant near Moree.

Company manager Wayne Clissold said the solid construction and reliability and durability of its Toyota forklifts was critical to the company's success.

"After the cotton is harvested the ginning process removes the dirt and debris and separates the cotton seeds and lint, with the latter packed into large cotton bales that we stack and later load onto trucks.

"Our Toyota forklifts can be in service almost around the clock during the harvest season, which can cover between three and six months of the year," Mr Clissold said.

"I give the technician a call when a service is nearly due and he comes over promptly to get the work done. We also discuss any issues or upcoming work that is required," Mr Shelton said.

"The forklifts often carry four large cotton bales at a time, so dual drive wheels are fitted which is a great feature for us as the wider footprint offers better stability and balance, especially when carrying multiple cotton bales, and better traction on the asphalt," Mr Shelton said.

The forklifts have also been fitted out with operator side protection gates for added safety and cotton bale clamps.

"These units were supplied with a Cascade quick-release side shift, so they can quickly and easily be converted back to a conventional forklift set up to handle pallets when required."

"The joystick control is another good feature as it provides better ergonomics and ease of use for the operators, who are often working long shifts.

"The windscreens are a welcome feature too as it can get very cold up here during harvest time," Mr Shelton said. 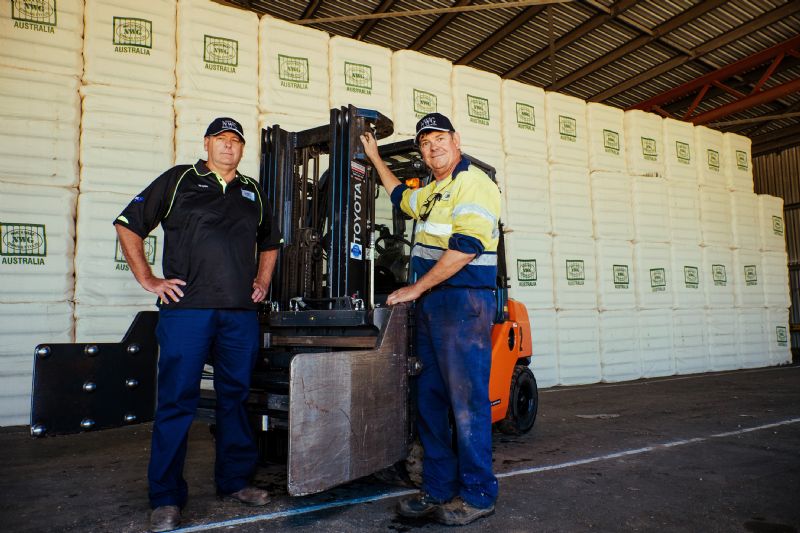