The final of the Toyota Forklift Challenge at Perth's Market City saw 10 of the market's best forklift operators represent their respective companies and compete for prizes while helping to raise awareness of workplace safety.

Held on 16 October, the 10 finalists navigated a course designed to simulate a range of activities typical of a forklift driver's normal working day. The contestants were awarded points for demonstrating safe forklift driving techniques while negotiating the course, rather than just how quickly they could complete it.

The final was won by Kirstie Downie from WA Crates - the first female entrant in the Toyota Forklift Challenge which is now in its second year.

"Safety is our number one priority and it's pleasing to see the keen interest from the audience and participants in this event," said Perth Market Authority CEO Stephen Ward.

"I'd like to congratulate the winners; it's a great achievement to be crowned Market City's best forklift driver for 2015."

Toyota Material Handling Australia WA branch manager Lance Cross said the second edition of the challenge was a great success and proved to be an enjoyable way to get the workplace safety message across where it really counts.

"Initiatives like the Toyota Forklift Challenge are a practical way to get all the drivers thinking about workplace safety, not just the 10 finalists," Mr Cross said.

"All the tenants and staff here at Perth Market City have really embraced the event. We put on a sausage sizzle and hundreds of staff came down to have a look and cheer on their respective teammates."

The design and safety features of Toyota's versatile 8-Series include Automatic Fork Levelling Control to level the forks during loading, ergonomically designed controls and smooth, quiet operation from the Toyota engine.

Toyota Forklift Challenge entrants registered by completing a questionnaire regarding safe forklift driving habits, with the top 10 respondents going through to compete in the final.

Both the questionnaire and practical round were overseen and judged by workplace training course provider TCE Training. 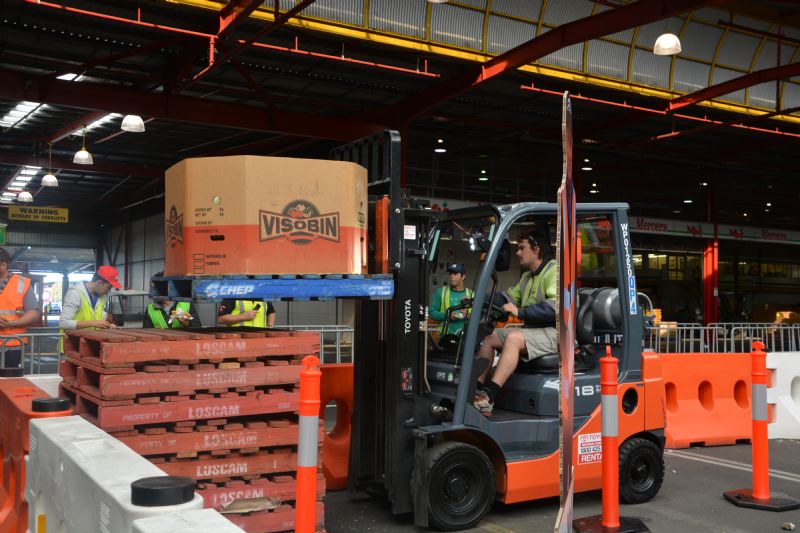 A contestant negotiates the course at the 2015 Toyota Forklift Challenge.