A leading grower of apples and cherries relies on a fleet of Toyota battery-electric forklifts at its orchards and packing sites.

Bonny Glen Fruits, based near Mount Canobolas in Orange, NSW, is a family-based business that sells fruit nationally and exports to China.

It has six Toyota 1.8-tonne payload forklifts, including three at its packing facility on Canobolas Road.

Managing director Bernard Hall said he bought the company's first Toyota forklift in 2001, one year after the business was founded, and has continued buying Toyota forklifts ever since.

"We bought our first Toyota forklift from the (then) local agent and haven't bought any other make since," he said.

"We still have the original forklift and commissioned our latest Toyota just six weeks ago. These days, we have a Toyota Material Handling Australia (TMHA) branch in Orange, with a really customer-focused manager in Richard Bopping who ensures we receive good service."

Bernard Hall regularly operates his Toyota forklifts and said the qualities he most appreciates in them are reliability and smooth operation.

"They're smooth, comfortable, reliable and user friendly, as well as being powerful and manoeuvrable and having important safety features," he said.

"The biggest thing is smoothness. They're quite precise to operate and there's no jolting or noise when you go over bumps."

"This family business is thriving in tough economic conditions through good management and marketing, taking advantage of the large Chinese marketplace for their fresh produce," he said.

"Toyota's strength in the Australian forklift market place means we can offer factory branch support in key regions like the central west of New South Wales.

"That level of service and local-branch support is a key reason customers give for choosing and remaining with Toyota."

Ergonomic features include a four-way adjustable suspension seat and rack and pinion hydrostatic power steering, while operator safety is enhanced by features like the Toyota System of Active Stability.

Bernard and his brother Tim learned the ropes of fruit growing while working at their father's orchard on the outskirts of Orange before Bernard founded his own business in 2000.

The company's four orchards in the Orange region, all at an altitude of around 1000 metres, grow seven varieties of cherries and eight varieties of apples. The produce is sold into chain stores, wholesale markets, at the farm gate and is also exported. 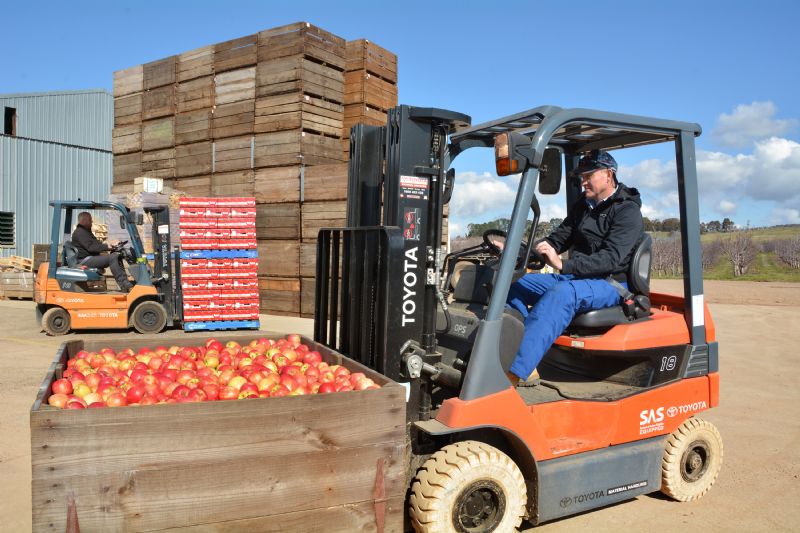