The reliability, user-friendliness, adaptability and after sales service of Toyota forklifts have prompted a burgeoning Australian transport business to update its fleet of 8-Series forklifts without even considering a competitor product.

The company runs a successful line haul business between Darwin and Adelaide, servicing businesses and communities - including remote areas of the Northern Territory, Western Australia and South Australia - with general freight requirements.

The seven 8-Series forklifts are used to unload and load freight to ABC Transport's prime movers, which deliver and collect freight at the Darwin depot on a daily basis.

ABC Transport CEO Jamie Eccleston said Toyota product, which had been in use since the Darwin depot was established in 2006, performed above expectation in an environment where the freight type constantly varied.

"Toyota is the number one forklift for us," Mr Eccleston said. "We have a lot of freight coming into Darwin every day and it's always different because we service a variety of customers.

"The feedback I've received from my operators is that the Toyota forklifts are easy to operate and they're also quick and stable, which means the job gets done efficiently.

"We also see a direct benefit to the business with Toyotas because they run trouble-free and we have the support of really helpful after-sales service.

"We don't have a lot of time to spare and when we need service they're in and out quickly, job done," Mr Eccleston added.

"ABC Transport has a great history with Toyota forklifts going back to when the Darwin depot was established," Mr Allen said. "The 8-Series does everything they need, with a tight turning radius and Automatic Fork Levelling Control, which is ideal when handling a wide variety of items.

"The safety features also provide peace of mind. Toyota SAS detects instability and corrects it to help prevent tip-overs. This works hand-in-hand with the Active Control Rear Stabiliser, which locks the rear axle if SAS detects any problems.

ABC Transport is a family-owned business and was established in 1998 with eight staff to provide freight services to local and remote Aboriginal communities in the Northern Territory.

It has achieved significant expansion over the past 15 years, with the establishment of the line haul between Darwin and Adelaide in 2005 and the growth of its workforce to 90.

The company has also accumulated a large fleet of vehicles, including 30 prime movers. 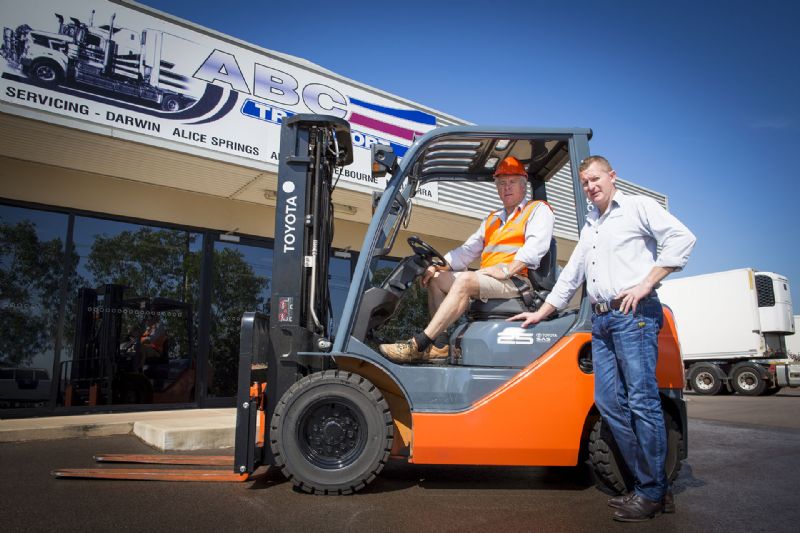