The Queensland branch of Toyota Material Handling ("TMH(QLD)") is moving to new, purpose built larger premises close to the Logan Motorway at Larapinta.

The move will provide a raft of benefits for its new and existing forklift and skid steer loader customers.

The branch has been based in Darra since 1988 and owned by Toyota Industries Corporation (TICO) since 2003.

"The new 6000 square-metre workshop is state of the art and three times the size of the current premises and will have twice as many work bays, as well as larger loading/unloading areas and a customer waiting lounge," he said.

"We expect the new workshop to increase efficiencies through better organisation and by providing higher service levels to our forklift and Huski skid-steer loader customers."

Mr Williams said the new premises will also increase the speed of machine delivery by bringing storage of new machines onto the same site as the pre-delivery workshop.

"The new facility will have 30 repair service bays and 30 pre-delivery bays, with space to grow the workshop as required and also to handle additional products in the future."

There is 1000m2 of office space, 6000m2 of hard-stand area for loading and unloading, as well as a new unit showroom and technician training facility.

Mr Williams said TMH (QLD) has 95 staff, including 60 technicians, eight apprentices, six in spare parts, plus 13 in sales and eight in operations. 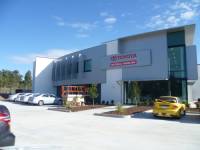